Mountain Moggy The Stoning of the Witch 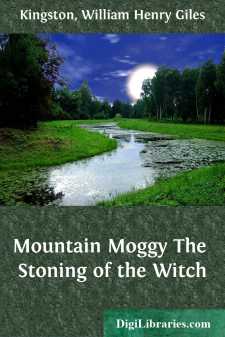 The succession of mountain ranges, precipitous and rugged, which extend from the shores of the Irish Sea to the boundaries of England, rising tier above tier, and culminating, at different points, in the heights of Snowdon, Cader Idris, and Plinlimmon, gives to wild Wales that romantic beauty for which it is so justly celebrated. That mountain region, too, guarded by the strong arms and undaunted hearts of its heroic sons, formed an impassable bulwark against the advance of barbarian invaders, and remained for many years, while Saxon England was yet pagan, the main refuge of that Christian religion to which Britain owes its present greatness. Yet subsequently, on account of the inaccessible nature of the country, the inhabitants, separated from their more enlightened fellow-subjects, remained for a long period almost as ignorant as their ancestors in the dark ages; and, till of late years, retained many of the grosser superstitions and customs of those times.

A young traveller was climbing the side of one of these mountain ranges facing the ocean, the silvery waters of which could be discerned in the distance, when he observed, far up, a hut. Solitary and cheerless it looked, scarcely to be distinguished from the sombre colouring of the surrounding ground and the rocks and bushes amid which it stood. It was weather-worn and dilapidated, and appeared altogether unfit to be the abode of a human being; indeed, a thin wreath of peat smoke ascending from an aperture in the roof alone made it likely that it was inhabited. Its appearance offered no temptation to the young stranger to turn aside from the path he was pursuing, and he continued his ascent till he gained a rocky pinnacle, from whence he could watch the sun dipping into the ocean; and hence he could look down, on one side, over a confused mass of barren hills and fertile valleys, rocks, and precipices, heights crowned with trees, peaks bare and rugged, and glens with sparkling torrents dashing and foaming amid them; while on the other side, towards the ocean, he saw before him a wide and smiling valley, with a stream meandering through it, and green meadows and groves of trees, from among which a church spire reared its pointed summit; and near it a cheerful village of white-washed cottages and other dwellings of more pretension; and there were sheep feeding, and cattle wending their way slowly homeward, all speaking of peace and security.

“I could not have selected a more lovely spot to spend an evening in, had I been allowed a choice,” said the young traveller to himself, as he took his seat on the highest point he could find. “As I cannot find my home, I could not be better off. I thought that I knew perfectly well the place my family have got to, but I am fairly puzzled with the Welsh names. I ought to have kept my brother’s letters in which he had clearly written it down. Whether it is Twrog-y-Bwlch, or Llwyd-y-Cynfael, or Dwyryd-y-Ffetiog, I am sure I don’t know. I hit the right post-town, of that I am nearly certain. There’s a village in the bottom. I might go down and inquire, but then I probably should not find my way back again over the mountain to the inn where I left my traps. I hope that I may hit it off to-morrow. It’s very tantalising, and provoking too, to be so near home, and yet not able to find it. It was very stupid to lose the letter. They do say midshipmen are very careless chaps, and that I am no exception to the rule. Well, I have no reason to grumble. I haven’t enjoyed such a sight as this for many a day, though it’s something like being mast-headed, except with the difference that I may go down when I like. I should enjoy it more if I had a messmate to talk to about it. The air is wonderfully fine up here. It makes me feel inclined to shout out at the top of my voice, ‘Rule, Britannia, Britannia rules the waves, And Britons never, never, never will be slaves,’ Hurra! That’s it. Hurra, boys! ‘We’ll fight and we’ll conquer again and again.’”

Thus the happy young midshipman gave full scope to the exuberance of his spirits, feeling very sure that no one was listening to him....