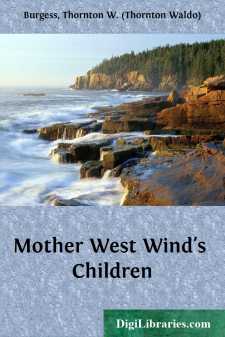 DANNY MEADOW MOUSE LEARNS WHY HIS TAIL IS SHORT

Danny Meadow Mouse sat in his doorway and looked down the Lone Little Path across the Green Meadows. Way, way over near the Smiling Pool he could see Old Mother West Wind's Children, the Merry Little Breezes, at play. Sammy Jay was sitting on a fence post. He pretended to be taking a sun bath, but really he was planning mischief. You never see Sammy Jay that he isn't in mischief or planning it.

Reddy Fox had trotted past an hour before in a great hurry. Up on the hill Danny Meadow Mouse could just see Jimmy Skunk pulling over every old stick and stone he could find, no matter whose house it might be, and excusing himself because he was hungry and was looking for beetles.

Jolly, round, red Mr. Sun was playing at hide and seek behind some fleecy white clouds. All the birds were singing and singing, and the world was happy—all but Danny Meadow Mouse.

No, Danny Meadow Mouse was not happy. Indeed, he was very far from happy, and all because his tail was short.

By and by up came old Mr. Toad. It was a warm day and Mr. Toad was very hot and very, very thirsty. He stopped to rest beside the house of Danny Meadow Mouse.

"I hope your health is good this morning," continued old Mr. Toad, just as if he hadn't noticed how short and cross Danny Meadow Mouse had answered.

Now old Mr. Toad is very ugly to look upon, but the ugliness is all in his looks. He has the sunniest of hearts and always he is looking for a chance to help someone.

"Danny Meadow Mouse," said old Mr. Toad, "you make me think of your grandfather a thousand times removed. You do indeed. You look just as he did when he lost the half of his tail and realized that he never, never could get it back again."

Old Mr. Toad laughed a funny silent laugh. "It's a long story," said old Mr. Toad, "and I'm afraid I can't tell it. Go down to the Smiling Pool and ask Great-Grandfather Frog, who is my first cousin, how it happened your grandfather a thousand times removed lost the half of his tail. But before you go catch three fat, foolish, green flies and take them with you as a present to Grandfather Frog."

Danny Meadow Mouse could hardly wait for old Mr. Toad to stop speaking. In fact, he was in such a hurry that he almost forgot his manners. Not quite, however, for he shouted "Thank you, Mr. Toad, thank you!" over his shoulder as he rushed off down the Lone Little Path.