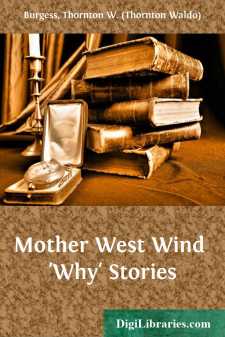 WHY STRIPED CHIPMUNK IS PROUD OF HIS STRIPES

The Merry Little Breezes of Old Mother West Wind are great friends of Striped Chipmunk. They hurry to call on him the very first thing every morning after Old Mother West Wind has brought them down from the Purple Hills. They always beg him to stop and play with them, but often he refuses. But he does it in such a merry way and with such a twinkle in his eyes that the Merry Little Breezes never get cross because he won't play. No, Sir, they never get cross. If anything, they think just a little bit more of Striped Chipmunk because he won't play. You see, they know that the reason he won't play is because he has work to do, and Striped Chipmunk believes and says:

"When there is work for me to doThe sooner started, sooner through."

So every morning they ask him to play, and every morning they laugh when he says he has too much to do. Then they rumple up his hair and pull his whiskers and give him last tag and race down to the Smiling Pool to see Grandfather Frog and beg him for a story. Now Grandfather Frog is very old and very wise, and he knows all about the days when the world was young. When he is feeling just right, he dearly loves to tell about those long-ago days.

One morning the Merry Little Breezes found Grandfather Frog sitting as usual on his big green lily-pad, and they knew by the way he folded his hands across his white and yellow waistcoat that it was full of foolish green flies.

"Oh, Grandfather Frog, please do tell us why it is that Striped Chipmunk has such beautiful stripes on his coat," begged one of the Merry Little Breezes.

"Chug-a-rum! They are stripes of honor," replied Grandfather Frog, in his deep, gruff voice.

"Honor! Oh, how lovely! Do tell us about it! Please do!" begged the Merry Little Breezes.

"Chug-a-rum!" began Grandfather Frog, his big, goggly eyes twinkling. "Once upon a time, when the world was young, old Mr. Chipmunk, the grandfather a thousand times removed of Striped Chipmunk, lived very much as Striped Chipmunk does now. He was always very busy, very busy, indeed, and it was always about his own affairs. 'By attending strictly to my own business, I have no time to meddle with the affairs of my neighbors, and so I keep out of trouble,' said old Mr. Chipmunk,"

"Just what Striped Chipmunk says now," broke in one of the Merry Little Breezes.

"That shows that he is just as wise as was his grandfather a thousand times removed, about whom I am telling you," replied Grandfather Frog. "Old Mr. Chipmunk wore just a little, plain brown coat. It didn't worry him a bit, not a bit, that his coat was just plain brown. It kept him just as warm as if it were a beautiful red, like that of Mr. Fox, or handsome black and white, like that of Mr. Skunk. He was perfectly satisfied with his little plain brown coat and took the best of care of it.

"One day as he was hurrying home to dinner, he climbed up on an old stump to look around and make sure that the way was clear. Over in a little path in the meadow grass was walking old Mr....