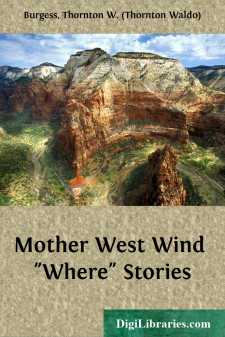 I WHERE GRANDFATHER FROG GOT HIS BIG MOUTH

Anyway, that is what Peter Rabbit says. Peter never will forget the first time he saw Grandfather Frog. Peter was very young then. He had run away from home to see the Great World, and in the course of his wanderings he came to the Smiling Pool. Never before had he seen so much water. The most water he had ever seen before was a little puddle in the Lone Little Path. So when Peter, who was only half grown then, hopped out on the bank of the Smiling Pool and saw it dimpling and smiling in the sunshine, he thought it the most wonderful thing he ever had seen. The truth is that in those days Peter was in the habit of thinking everything he saw for the first time the most wonderful thing yet, and as he was continually seeing new things, and as his eyes always nearly popped out of his head whenever he saw something new, it is a wonder that he didn't become pop-eyed.

Peter stared and stared at the Smiling Pool, and little by little he began to see other things. First he noticed the bulrushes growing with their feet in the water. They looked to him like giant grass, and he began to be a little fearful lest this should prove to be a sort of magic place—a place of giants. Then he noticed the lily-pads, and he stared very hard at these. They looked like growing things, and yet they seemed to be floating right on top of the water. It wasn't until a Merry Little Breeze came along and turned the edge of one up so that Peter saw the long stem running down in the water out of sight, that he was able to understand how those lily-pads could be growing there. He was still staring at those lily-pads when a great deep voice said:

"Chug-a-rum! Chug-a-rum! Don't you know it isn't polite to stare at people?"

That voice was so unexpected and so deep that Peter was startled. He jumped, started to run, then stopped. He wanted to run, but curiosity wouldn't let him. He simply couldn't run away until he had found out where that voice came from and to whom it belonged. It seemed to Peter that it had come from right out of the Smiling Pool, but look as he would, he couldn't see any one there.

"If you please," said Peter timidly, "I'm not staring at anybody." All the time he was staring down into the Smiling Pool with eyes fairly popping out of his head.

"Chug-a-rum! Have a care, young fellow! Have a care how you talk to your elders. Do you mean to be impudent enough to tell me to my face that I am not anybody?" The voice was deeper and gruffer than ever, and it made Peter more uncomfortable than ever.