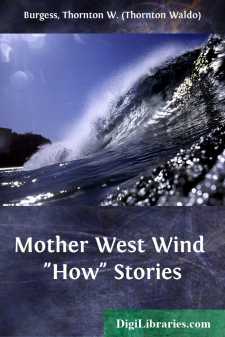 Peter Rabbit sat on the edge of the dear Old Briar-patch, staring up into the sky with his head tipped back until it made his neck ache. Way, way up in the sky was a black speck sailing across the snowy white face of a cloud. It didn't seem possible that it could be alive way up there. But it was. Peter knew that it was, and he knew who it was. It was King Eagle. By and by it disappeared over towards the Great Mountain. Peter rubbed the back of his neck, which ached because he had tipped his head back so long. Then he gave a little sigh.

"I wonder what it seems like to be able to fly like that," said he out loud, a way he sometimes has.

"Are you envious?" asked a voice so close to him that Peter jumped. There was Sammy Jay sitting in a little tree just over his head.

"No!" snapped Peter, for it made him a wee bit cross to be so startled.

"Have you ever seen King Eagle close to?" asked Sammy.

"Once," replied Peter. "Once he came down to the Green Meadows and sat in that lone tree over there, and I was squatting in a bunch of grass quite near and could see him very plainly. He is big and fierce-looking, but he looks his name, every inch a king. I've wondered a good many times since how it happens that he has a white head."

"Because," replied Sammy, "he is just what he looks to be,—king of the birds,—and that white head is the sign of his royalty given his great-great-ever-so-great-grandfather by Old Mother Nature, way back in the beginning of things."

"All right, Peter. I'll tell you the story, because it will do you good to hear it. I supposed everybody knew it. All birds do. That is why we all look up to King Eagle," replied Sammy.

"Way back in the beginning of things, old King Bear ruled in the Green Forest, as you know. That is, he ruled the animals and all the little people who lived on the ground, but he didn't rule the birds. You see the birds were not willing to be ruled over by an animal. They wanted one of their own kind. So they refused to have old King Bear as their king and went to Old Mother Nature to ask her to appoint a king of the air. Now Mr. Eagle was one of the biggest and strongest and most respected of all the birds of the air. There were some, like Mr. Goose and Mr. Swan, who were bigger, but they spent most of their time on the water or the earth, and they had no great claws or hooked beak to command respect as did Mr. Eagle. So Old Mother Nature made Mr. Eagle king of the air, and as was quite right and proper, all the birds hastened to pay him homage.

"So King Eagle ruled the air and none dared to cross him or to disobey him. Unlike old King Bear, he accepted no tribute from his subjects but hunted for himself, and instead of growing fat and lazy, as did old King Bear, he grew stronger of wing and feared no one and nothing....