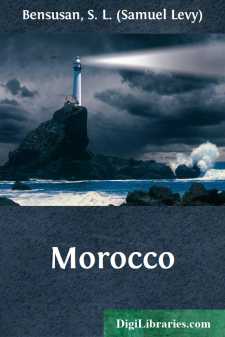 CHAPTER I BY CAPE SPARTEL Over the meadows that blossom and witherRings but the note of a sea-bird's song,Only the sun and the rain come hitherAll year long. The Deserted Garden.

Before us the Atlantic rolls to the verge of the "tideless, dolorous inland sea." In the little bay lying between Morocco's solitary lighthouse and the famous Caves of Spartel, the waters shine in colours that recall in turn the emerald, the sapphire, and the opal. There is just enough breeze to raise a fine spray as the baby waves reach the rocks, and to fill the sails of one or two tiny vessels speeding toward the coast of Spain. There is just enough sun to warm the water in the pools to a point that makes bathing the most desirable mid-day pastime, and over land and sea a solemn sense of peace is brooding. From where the tents are set no other human habitation is in sight. A great spur of rock, with the green and scarlet of cactus sprawling over it at will, shuts off lighthouse and telegraph station, while the towering hills above hide the village of Mediunah, whence our supplies are brought each day at dawn and sun-setting.

Two fishermen, clinging to the steep side of the rock, cast their lines into the water. They are from the hills, and as far removed from our twentieth century as their prototypes who were fishing in the sparkling blue not so very far away when, the world being young, Theocritus passed and gave them immortality. In the valley to the right, the atmosphere of the Sicilian Idylls is preserved by two half-clad goatherds who have brought their flock to pasture from hillside Mediunah, in whose pens they are kept safe from thieves at night. As though he were a reincarnation of Daphnis or Menalcas, one of the brown-skinned boys leans over a little promontory and plays a tuneless ghaitah, while his companion, a younger lad, gives his eyes to the flock and his ears to the music. The last rains of this favoured land's brief winter have passed; beyond the plateau the sun has called flowers to life in every nook and cranny. Soon the light will grow too strong and blinding, the flowers will fade beneath it, the shepherds will seek the shade, but in these glad March days there is no suggestion of the intolerable heat to come.

THE COURT-YARD OF THE LIGHTHOUSE, CAPE SPARTEL

On the plot of level ground that Nature herself has set in position for a camp, the tents are pitched. Two hold the impedimenta of travel; in the third Salam and his assistant work in leisurely fashion, as befits the time and place. Tangier lies no more than twelve miles away, over a road that must be deemed uncommonly good for Morocco, but I have chosen to live in camp for a week or two in this remote place, in preparation for a journey to the southern country. At first the tents were the cynosure of native eyes. Mediunah came down from its fastness among the hilltops to investigate discreetly from secure corners, prepared for flight so soon as occasion demanded it, if not before. Happily Salam's keen glance pierced the cover of the advance-guard and reassured one and all. Confidence established, the village agreed after much solemn debate to supply eggs, chickens, milk, and vegetables at prices doubtless in excess of those prevailing in the country markets, but quite low enough for Europeans.

This little corner of the world, close to the meeting of the Atlantic and Mediterranean waters, epitomises in its own quiet fashion the story of the land's decay. Now it is a place of wild bees and wilder birds, of flowers and bushes that live fragrant untended lives, seen by few and appreciated by none. It is a spot so far removed from human care that I have seen, a few yards from the tents, fresh tracks made by the wild boar as he has rooted o' nights; and once, as I sat looking out over the water when the rest of the camp was asleep, a dark shadow passed, not fifty yards distant, going head to wind up the hill, and I knew it for "tusker" wending his way to the village gardens, where the maize was green.

Yet the district has not always been solitary. Where now the tents are pitched, there was an orange grove in the days when Mulai Abd er Rahman ruled at Fez and Marrakesh, and then Mediunah boasted quite a thriving connection with the coasts of Portugal and Spain. The little bay wherein one is accustomed to swim or plash about at noonday, then sheltered furtive sailing-boats from the sleepy eyes of Moorish authority, and a profitable smuggling connection was maintained with the Spanish villages between Algeciras and Tarifa Point. Beyond the rocky caverns, where patient countrymen still quarry for millstones, a bare coast-line leads to the spot where legend places the Gardens of the Hesperides; indeed, the millstone quarries are said to be the original Caves of Hercules, and the golden fruit the hero won flourished, we are assured, not far away. Small wonder then that the place has an indefinable quality of enchantment that even the twentieth century cannot quite efface.

Life in camp is exquisitely simple. We rise with the sun. If in the raw morning hours a donkey brays, the men are very much perturbed, for they know that the poor beast has seen a djin. They will remain ill-at-ease until, somewhere in the heights where Mediunah is preparing for another day, a cock crows....