More Tales in the Land of Nursery Rhyme 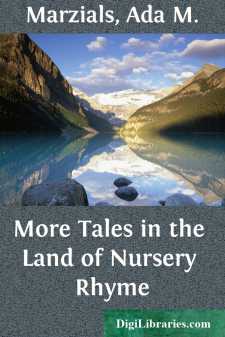 The North Wind doth blow,And we shall have snow,And what will the robin do then? Poor thing!He will sit in a barn,And to keep himself warmHe will hide his head under his wing. Poor thing!

Oh, how cold it was!

The North Wind howled round the barn, whirling the snowflakes into a little heap inside the half-open door. Even beyond the little heap of snow, right inside the barn among the whisps of hay and straw, and beyond the pile of turnips piled up in one far corner, it was still bitterly cold and draughty.

The few birds left had found their way into the old barn for shelter, and were close together on a low bar of wood at the far end, where they sat ruffling their feathers and shivering.

From time to time one of them would peer out at the leaden grey sky and the falling snowflakes, and then hide its head under its wing again to deaden the sound of the wind whistling through the crannies.

There were five of them.

A Robin, who had been blown in with the last gust of wind; a wretched little Sparrow, who twittered helplessly from time to time, and then hid her head ashamed at having been betrayed into such an exhibition of weakness in public; an Owl, who, living habitually in the barn, regarded the others with suspicion as intruders, and possibly thieves; and, lastly, two queer Japanese birds, who had lived all the summer on the ornamental lake in the garden.

These latter had been brought to the barn during the bad weather, as they were considered too delicate to bear the stress of a really cold English winter, and were looked down on and despised by the other birds as foreigners. They were very shy, and crouched side by side in one corner, never venturing a remark unless first spoken to. The Robin, though he was the latest comer, had, by reason of his cheery good-nature, and a certain perky self-confidence, already gained for himself a position as leader among the other birds. Even the old Owl blinked and winked occasionally at his jokes, and the Sparrow was soon reduced to a helpless state of twittering giggles. But laughing will not keep you warm, and at last even the Robin was forced to confess that he had never been colder in his life; and what was the use of thinking of all the plum-puddings and mince pies and bread crumbs and holly-berries in the world, when you were feeling as though you had not a feather on your body to bless yourself with!

"I wish I could make the snow stop somehow," he said. "It is all very well for Mother Goose to go on plucking out feathers up there, but she does not help to make us any warmer."

"Pooh!" said the Owl, who had lately condescended to join in the conversation. "Who told you all that rubbish about Mother Goose? Why, the snow has no more to do with Mother Goose than I have!… Mother Goose, indeed!" and she blinked twice, just to show that she could tell more if she chose.

"Bird of Wisdom," piped the Robin, with a wink at the Sparrow, which set her off giggling worse than ever, "enlighten us, I pray you, as to the true cause of snow?"

"Yes, do," said the Sparrow, when she had recovered her breath....