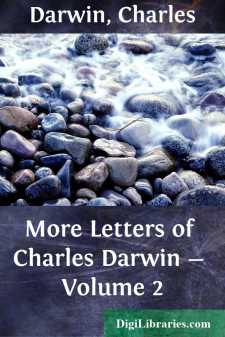 Prof. Miquel, of Utrecht, begs me to ask you for your carte, and offers his in return. I grieve to bother you on such a subject. I am sick and tired of this carte correspondence. I cannot conceive what Humboldt's Pyrenean violet is: no such is mentioned in Webb, and no alpine one at all. I am sorry I forgot to mention the stronger African affinity of the eastern Canary Islands. Thank you for mentioning it. I cannot admit, without further analysis, that most of the peculiar Atlantic Islands genera were derived from Europe, and have since become extinct there. I have rather thought that many are only altered forms of existing European genera; but this is a very difficult point, and would require a careful study of such genera and allies with this object in view. The subject has often presented itself to me as a grand one for analytic botany. No doubt its establishment would account for the community of the peculiar genera on the several groups and islets, but whilst so many species are common we must allow for a good deal of migration of peculiar genera too.

By Jove! I will write out next mail to the Governor of St. Helena for boxes of earth, and you shall have them to grow. Thanks for telling me of having suggested to me the working out of proportions of plants with irregular flowers in islands. I thought it was a deuced deal too good an idea to have arisen spontaneously in my block, though I did not recollect your having done so. No doubt your suggestion was crystallised in some corner of my sensorium. I should like to work out the point.

Have you Kerguelen Land amongst your volcanic islands? I have a curious book of a sealer who was wrecked on the island, and who mentions a volcanic mountain and hot springs at the S.W. end; it is called the "Wreck of the Favourite." (378/1. "Narrative of the Wreck of the 'Favourite' on the Island of Desolation; detailing the Adventures, Sufferings and Privations of John Munn; an Historical Account of the Island and its Whale and Sea Fisheries." Edited by W.B. Clarke: London, 1850.)

It is a long time since I have written, but I cannot boast that I have refrained from charity towards you, but from having lots of work...You ask what I have been doing. Nothing but blackening proofs with corrections. I do not believe any man in England naturally writes so vile a style as I do...

In your paper on "Insular Floras" (page 9) there is what I must think an error, which I before pointed out to you: viz., you say that the plants which are wholly distinct from those of nearest continent are often very common instead of very rare. (379/1. "Insular Floras," pamphlet reprinted from the "Gardeners' Chronicle," page 9: "As a general rule the species of the mother continent are proportionally the most abundant, and cover the greatest surface of the islands. The peculiar species are rarer, the peculiar genera of continental affinity are rarer still; whilst the plants having no affinity with those of the mother continent are often very common." In a letter of March 20th, 1867, Sir Joseph explains that in the case of the Atlantic islands it is the "peculiar genera of EUROPEAN AFFINITY that are so rare," while Clethra, Dracaena and the Laurels, which have no European affinity, are common.) Etty (379/2....