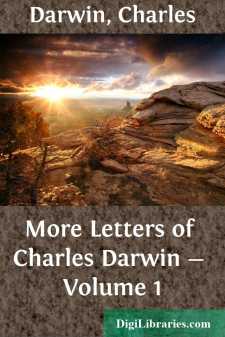 The "Life and Letters of Charles Darwin" was published in 1887. Since that date, through the kindness of various correspondents, additional letters have been received; among them may be mentioned those written by Mr. Darwin to Mr. Belt, Lady Derby, Hugh Falconer, Mr. Francis Galton, Huxley, Lyell, Mr. John Morley, Max Muller, Owen, Lord Playfair, John Scott, Thwaites, Sir William Turner, John Jenner Weir. But the material for our work consisted in chief part of a mass of letters which, for want of space or for other reasons, were not printed in the "Life and Letters." We would draw particular attention to the correspondence with Sir Joseph Hooker. To him Mr. Darwin wrote with complete freedom, and this has given something of a personal charm to the most technical of his letters. There is also much correspondence, hardly inferior in biographical interest, with Sir Charles Lyell, Fritz Muller, Mr. Huxley, and Mr. Wallace. From this unused material we have been able to compile an almost complete record of Mr. Darwin's work in a series of letters now published for the first time. We have, however, in a few instances, repeated paragraphs, or in one or two cases whole letters, from the "Life and Letters," where such repetition seemed necessary for the sake of clearness or continuity.

Our two volumes contain practically all the matter that it now seems desirable to publish. But at some future time others may find interesting data in what remains unprinted; this is certainly true of a short series of letters dealing with the Cirripedes, which are omitted solely for want of space. (Preface/1. Those addressed to the late Albany Hancock have already appeared in the "Transactions of the Tyneside Nat. Field Club," VIII., page 250.)

We are fortunate in being permitted, by Sir Joseph Hooker and by Mr. Wallace, to publish certain letters from them to Mr. Darwin. We have also been able to give a few letters from Sir Charles Lyell, Hugh Falconer, Edward Forbes, Dr. Asa Gray, Professor Hyatt, Fritz Muller, Mr. Francis Galton, and Sir T. Lauder Brunton. To the two last named, also to Mrs. Lyell (the biographer of Sir Charles), Mrs. Asa Gray and Mrs. Hyatt, we desire to express our grateful acknowledgments.

The present volumes have been prepared, so as to give as full an idea as possible of the course of Mr. Darwin's work. The volumes therefore necessarily contain many letters of a highly technical character, but none, we hope, which are not essentially interesting. With a view to saving space, we have confined ourselves to elucidating the letters by full annotations, and have for the same reason—though with some regret—omitted in most cases the beginnings and endings of the letters. For the main facts of Mr. Darwin's life, we refer our readers to the abstract of his private Diary, given in the present volume.

Mr. Darwin generally wrote his letters when he was tired or hurried, and this often led to the omission of words. We have usually inserted the articles, and this without any indication of their absence in the originals....