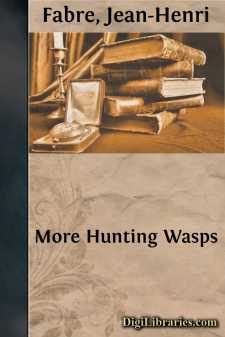 (This essay should be read in conjunction with that on the Black-bellied Tarantula. Cf. "The Life of the Spider," by J. Henri Fabre, translated by Alexander Teixeira de Mattos: chapter 1.—Translator's Note.)

Who that has diverted himself, however little, with the study of insects does not know the Pompili? Against old walls, at the foot of the banks beside unfrequented footpaths, in the stubble after the harvest, in the tangles of dry grass, wherever the Spider spreads her nets, who has not seen them busily at work, now running hither and thither, at random, their wings raised and quivering above their backs, now moving from place to place in flights long or short? They are hunting for a quarry which might easily turn the tables and itself prey upon the trapper lying in wait for it.

The Pompili feed their larvae solely on Spiders; and the Spiders feed on any insect, commensurate with their size, that is caught in their nets. While the first possess a sting, the second have two poisoned fangs. Often their strength is equally matched; indeed the advantage is not seldom on the Spider's side. The Wasp has her ruses of war, her cunningly premeditated strokes: the Spider has her wiles and her set traps; the first has the advantage of great rapidity of movement, while the second is able to rely upon her perfidious web; the one has a sting which contrives to penetrate the exact point to cause paralysis, the other has fangs which bite the back of the neck and deal sudden death....