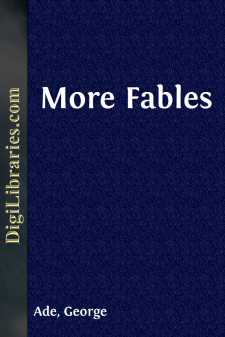 When Uncle Brewster had put on his Annual Collar and combed his Beard and was about to start to the Depot, his Wife, Aunt Mehely, looked at him through her Specs and shook her Head doubtfully.

Then she spoke as follows: "You go slow there in the City. You know your Failin's. You're just full of the Old Harry, and when you're Het Up you're just like as not to Raise Ned."

"I guess I can take keer of myse'f about as well as the Next One," retorted Uncle Brewster. "I've been to the Mill an' got my Grist, if any one should ask. I ain't no Greeny."

With that he started for the Train, which was due in one Hour.

As he rode toward the Great City he smoked a Baby Mine Cigar, purchased of the Butcher, and told the Brakeman a few Joe Millers just to throw out the Impression that he was Fine and Fancy.

After he had Registered at the Hotel and Swelled Up properly when addressed as "Mister" by the Clerk, he wanted to know if there was a Lively Show in Town. The Clerk told him to follow the Street until he came to all the Electric Lights, and there he would find a Ballet. Uncle Brewster found the Place, and looked in through the Hole at an Assistant Treasurer, who was Pale and wore a Red Vest.

"I want a Chair near the Band," said Uncle Brewster. "How much does one of 'em Fetch?"

"Two Dollars," replied the Assistant Treasurer, pulling down his Cuffs and then examining himself in a small Mirror at one side of the Diagram.

"Great Grief!" ejaculated Uncle Brewster. "I only paid Thirty-Five Cents for the Glass Blowers, an' I'll warrant you they beat your Troupe as bad as Cranberries beats Glue. I'll see you plumb in Halifax before I—"

Uncle Brewster saw a Policeman, and thought it his Duty to tell the Officer that the Theater Folks were a Pack of Robbers.

"Up an Alley," said the Policeman.

Instead of going to a Show, Uncle Brewster stood in front of a Clothing Store and watched the Wax Figures.

When he got back to his Room the Bell-Hopper came around and asked him if he cared to Sit in a Quiet Game. Uncle Brewster wanted to know whether they were Gamblers or Business Men, and the Boy said they were Business Men. It was all Friendly, with an Ante of Two Bits and the Chandelier as the Limit. Uncle Brewster said he was accustomed to playing with Lima Beans, Three for a Cent and One call Two and no fair to Bluff. The Bell-Hopper told him to Turn In and get a Good Night's Rest.

Next Morning at the Hotel he spotted a stylish little Chunk of a Woman who kept the Cigar Case and sold Books with Actress Photos on the outside.

He walked over to buy a Cigar, but he happened to see the "3 for 50c." Label and his Feet got cold.

So, instead of buying a Cigar, he conversed with the Proprietress. He seemed to be a Success with her, and ventured to say that he was a Stranger in Town and would like first-rate to go out to a Lecture or some other kind of Entertainment that Evening if he could find a Nice Girl that didn't mind going with a Respectable Man who could give References, and besides was nearly old enough to be her Father....