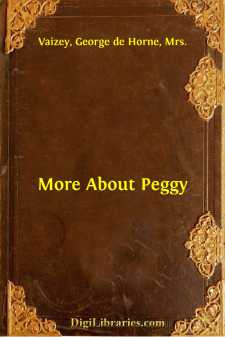 It was mid-January, and at home in England the ground was white with snow, but the sun shone down with brazen glare on the blue waters of the Bay of Bengal, along which a P and O steamer was gliding on its homeward way. An awning was hoisted over the deck, but not a breath of wind fluttered its borders, and the passengers lay back in their deck-chairs too limp and idle to do more than flick over the pages of the books which they were pretending to read. It was only twenty-four hours since they had left Calcutta, and they were still in that early stage of journeying when they looked askance at their fellows, decided that never, no, never had Fate placed them in the midst of such uninteresting companions, and determined to keep severely to themselves during the rest of the voyage.

The stout lady in the white piqué stared stonily at the thin lady in drill, and decided that she was an “Impossible Person,” blissfully unconscious of the fact that before Aden was reached she would pour all her inmost secrets into the “Impossible Person’s” ear, and weep salt tears at parting from her at Marseilles. The mother of the sickly little girls in muslin swept them away to the other end of the deck when she discovered them playing with the children who inhabited the next state-room, and the men stared at one another stolidly across the smoking-room. The more experienced travellers knew that ere a week had passed the scene would be changed, that a laughing babel of voices would succeed the silence, and deck sports and other entertainments take the place of inaction; but the younger members of the party saw no such alleviation ahead, and resigned themselves to a month of frosty solitude.

The ladies dozed amongst their cushions, but the men strolled up and down the deck smoking their cigars with that air of resigned dejection which seems to be the monopoly of Englishmen of the upper classes. The quick movements, animated gestures, and sparkling eyes of the Southerner were all lacking in these strongly built, well-dressed, well-set-up men, who managed to conceal all signs of animation so successfully that no one looking at them could have believed that one was the wit of his regiment, another celebrated throughout an Indian province for his courage and daring, and a third an expectant bridegroom!

About eleven o’clock a diversion was made on the upper deck by the appearance of two more travellers—an elegant-looking woman accompanied by her husband, who came forward in search of the deck-chairs which had been placed in readiness for their use. They were not a young couple by any means, yet the eyes of the passengers followed their movements with interest, for they were not only exceedingly good to look upon, but had an air of enjoyment in their surroundings and in each other’s society which is unfortunately not universal among middle-aged couples. The man was tall and slight, with the weather-beaten, dried-up skin which tells of a long residence under burning suns, and he had a long nose, and eyes which appeared almost startlingly blue against the brown of his skin....