Morality as a Religion An exposition of some first principles 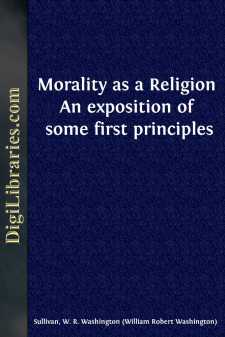 A recent work by M. Guyau was originally announced under the title of The Non-Religion of the Future, and, doubtless, an impression is generally prevalent that, with the modification or disappearance of traditional forms of Belief, the fate of Religion itself is involved.

The present volume is a plea for a reconsideration of the Religious question, and an inquiry as to the possibility of reconstructing Religion by shifting its basis from inscrutable dogmas to the unquestionable facts of man's moral nature. It is now some fifty years since Emerson wrote that "the progress of Religion is steadily towards its identification with Morals," and foretold "a new Church founded on Moral Science . . . the Church of men to come". It is more than a century since the immortal Immanuel Kant startled Europe by the betrayal of the immensity of the emotion whereby the contemplation of "man's sense of law" filled his soul, shedding henceforth an unfading glory about the ideal of Duty and Virtue, and elevating it in the strictest sense to the supreme height of Religion. What these men—the prophet and philosopher of the New Idealism—thought and did has borne fruit in the foundation in America, Great Britain and Ireland, in France, Germany, Austria and Italy, of Centres or Societies of Ethical Culture which assume as axiomatic that there is, there can be, no Religion but that which makes us one with the Moral Progress of Humanity, by incessant co-operation with "the Power that makes for Righteousness". If Religion be, what its name signifies, the unifying principle of mankind, in no other wise can we be possibly made One with each other and with the Universal Power than by so living as to secure the ends for which worlds and men exist. As the great Ethical prophet of the West expressed the truth: "My Father worketh even until now, and I also work". In such co-operation by moral life we place the very essence of Religion.

With a view to propagating such a conception of Religion, wholly based on Morality, a Society was founded in the autumn of the past year which assumed the title of "The Ethical Religion Society," and described itself as a branch of "The Ethical Church," "the Church of men to come," which is one day to emerge from the united efforts of all who believe in the everlasting "Sovereignty of Ethics," the unconditioned Supremacy of the Moral Law. The Ethical Movement is now beginning to spread in Europe and America. It is represented very largely in the United States, where, indeed, it was inaugurated some twenty years ago by Dr. Felix Adler, of New York; in Germany, by a score or more of Societies; in Italy, in Austria, in Hungary, and quite recently in France and Norway. London, of course, is represented by numerous Societies, and Ireland possesses one at Belfast. So far, there has been nothing definite accomplished towards a federation of these representative Bodies, though some preliminary steps have been taken in the formation of an international committee....