Mohammed, The Prophet of Islam 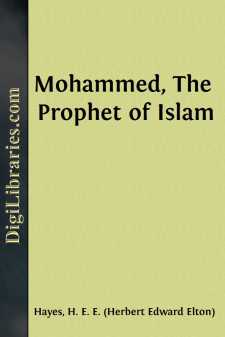 Just as the character of Jesus is stamped upon the religion which originated in His Person, so is the character of Mohammed impressed upon the system which he, with marvellous ingenuity, founded. The practical influence of Islam upon individual lives produces results that reflect unmistakably the character of its founder, and a careful study of the tenets of the system in relation to its history enable the student to estimate the real worth of the man.

As the Apostle of God, Mohammed is the ideal of every true Moslem. His life is the standard by which the lives of his followers are tested, although he himself confesses that his life was not holy. In the Koran, and the earlier traditions, he is pictured as being in no way better than his fellows, and as weak and liable to error as the poorest of his contemporaries. Yet later tradition minimises his faults and weakness, and surrounds his person with a halo of glory that makes him appear sinless and almost divine. All the doubtful incidents of his life are either eliminated and ignored, or assiduously supported and defended by his pious, misguided followers.

It is a point in his favour that he never claimed infallibility for his actions or opinions; and his habit of attempting to cover or justify his glaring faults by suitable revelations, although indefensibly immoral, reveals the fact that he was conscious of his own shortcomings. When he was at the zenith of his power, "revelation" became merely an instrument of self glorification, licensing him in every whim and fancy, because it gave him, as the prophet of God, exemption from all law and order. His scheme was characteristically ingenious and immoral. Had he known of the divine effulgence with which he was afterwards encircled by his fanatical followers, he would, in all probability, have strongly discountenanced it. The incongruous sanctity with which his commonplace utterances and petty actions were invested would have caused fear lest it became derogatory to his creed of divine unity.

As a source of information, the traditions are obviously unreliable, for they are coloured by the excessive zeal and irrational bias of men whose judgment was warped by irrepressible fanaticism. They attributed to their hero elements that are grotesquely impossible. His advent was in their estimation, so portentous that it was celebrated by events which, for the time, upset all natural law. And his whole life has been linked with miraculous happenings of a most ludicrous type. More reasonable men have exalted the prophet because they have convinced themselves that he was what he ought to have been. This may account for the pious confidence of some of the more intelligent, who, accepting tradition as historical, have exalted their hero to the ideal, and have received the imagined glory as real. This tendency to exalt their master is well illustrated by the maxim of Shafy—"In the exaltation of Mohammed it is lawful to exaggerate"—a maxim invaluable to men who were seeking to glorify the prophet, and the usefulness of which was fully appreciated by the legislators and doctors when they were called upon to cope with the new relations and exigencies that came into being after his death. The conquests and progress of Islam necessitated almost daily the framing of new rules, while in the application of the old, constant modification and adaptation were required. To meet these needs, actual or supposed sayings and actions of the prophet were eagerly sought after, and, in time, with the growth of a professional body of traditionalists, all legitimate sources being exhausted, that which was doubtful, and even disputed, was accepted as authentic and reliable. Imagination augmented the legitimate springs of information, and the result was an exhaustive accumulation of precedents for every possible circumstance.

Sprenger, in his essay on "Tradition," regarding the value and nature of the material needed for compiling a life of Mohammed, says:

"During the stir and activity of the first sixty years, thousands and thousands occupied themselves with handing down traditions. In every mosque they committed them to memory, and rehearsed them in every social gathering. All such knowledge was the common property of the nation; it was learned by heart and transmitted orally. It possessed, therefore, in the highest possible degree, the elements of life and plasticity. Bunson has discovered the divinity of the Bible in its always having been the people's book. If this criterion be decisive, then no religion has better claim to be called the 'vox Dei,' because none is in so full a sense the 'vox populi.' The creations of the period we have been considering possess this character for hundreds of millions of our fellow men; for modern Islamism is as far removed from the spirit in which the Coran was composed, as Catholicism is from the spirit of the Gospel; and modern Islamism is grounded upon tradition. But in tradition we find nothing but the Ideal, Invention, Fancy, Historical facts, however they may have been floating among the people in the days if Ibn 'Abbas, and the other founders of genealogy, were trodden under feet, because men wished to remove every barrier which stood in the way of self-glorification....