Modern Skepticism: A Journey Through the Land of Doubt and Back Again A Life Story 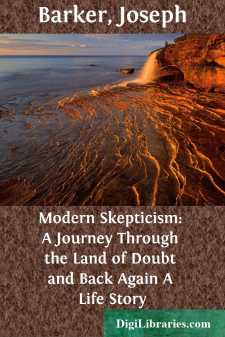 When a man has travelled far, and seen strange lands, and dwelt among strange peoples, and encountered unusual dangers, it is natural, on his return home, that he should feel disposed to communicate to his family and friends some of the incidents of his travels, and some of the discoveries which he may have made on his way.

So when a man has travelled far along the way of life, especially if he has ventured on strange paths, and come in contact with strange characters, and had altogether a large and varied experience, it is natural, as he draws near to the end of his journey, or when he reaches one of its more important stages, that he should feel disposed to communicate to his friends and kindred some of the incidents of his life's pilgrimage, and some of the lessons which his experience may have engraven on his heart. He will especially be anxious to guard those who have life's journey yet before them, against the errors into which he may have fallen, and so preserve them from the sorrows that he may have had to endure.

And so it is with me. I have travelled far along the way of life. I may now be near its close. I have certainly of late passed one of its most important stages. I have had a somewhat eventful journey. There are but few perhaps who have had a larger or more varied experience. I have committed great errors, and I have in consequence passed through grievous sorrows; and I would fain do something towards saving those who come after me from similar errors and from similar sorrows: and this is the object of the work before you.

At an early period, when I was little more than sixteen years of age, I became a member of the Methodist society. Before I was twenty I became a local preacher. Before I was twenty-three I became a travelling preacher; and after I had got over the first great difficulties of my calling, I was happy in my work; as happy as a mortal man need wish to be. It was my delight to read good books, to study God's Word and works, and to store my mind with useful knowledge. To preach the Gospel, to turn men from darkness to light, and from the power of Satan to God, and to promote the instruction and improvement of God's people were the joy and rejoicing of my soul. There were times, and those not a few, when I could sing with Wesley—

"In a rapture of joy my life I employ,The God of my life to proclaim:'Tis worth living for this, to administer blissAnd salvation in Jesus's name."

And I was very successful in my work. I never travelled in a circuit in which there was not a considerable increase of members, and in one place where I was stationed, the numbers in church-fellowship were more than doubled in less than eighteen months.

In those days it never once entered my mind that I could ever be anything else but a Christian minister: yet in course of time I ceased to be one; ceased to be even a Christian. I was severed first from the Church, and then from Christ, and I wandered at length far away into the regions of doubt and unbelief, and came near to the outermost confines of eternal night. And the question arises,

How happened this? And how happened it that, after having wandered so far away, I was permitted to return to my present happy position?

These two questions I shall endeavor, to the best of my ability, to answer.

How came I to wander into doubt and unbelief?

1. There are several causes of skepticism and infidelity. One is vice. When a man is bent on forbidden pleasures, he finds it hard to believe in the truth and divinity of a religion that condemns his vicious indulgences. And the longer he persists in his evil course, the darker becomes his understanding, the more corrupt his tastes, and the more perverse his judgment; until at length he "puts darkness for light, and light for darkness; calls evil good and good evil, and mistakes bitter for sweet, and sweet for bitter." He becomes an infidel. It is the decree of Heaven that men who persist in seeking pleasure in unrighteousness, shall be given up to strong delusions of the devil to believe a lie.

2. But there are other causes of skepticism and unbelief besides vice. Thomas was an unbeliever for a time,—a very resolute one,—yet the Gospel gives no intimation that he was chargeable with any form of vice....