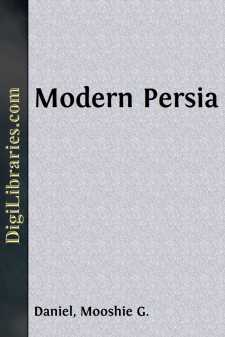 The ancestors of M. G. Daniel, a true stock of the Nestorian sect and Syrian nationality came down from Kurdiston mountain in 1740 and settled in Persia at Oroomiah district. The one family now increased to fifty, all live in villages near to each other. G. Daniel with his four brothers settled in a small village four miles east of Oroomiah city. The inhabitants of this village are composed of fifty Mohammedan families and twenty-eight Nestorians. His parents had four sons and two daughters, all died in their childhood. Daniel was their seventh child born in 1861. His native village was visited by Rev. G. Coan, D.D. and Dr. Perkins, missionaries from America who preached the gospel message to the Nestorians of that village, at the same time also started a school for their children. At this time Daniel was thirteen years old. The parents were very glad to send their children to this school which increased to thirty students.

Daniel was very anxious to attend this school. This desire was encouraged in every possible way by his earnest, self sacrificing Christian mother, Rachel, who came of high and noble lineage. But his father vigorously objected for fear his son would change from his old Nestorian faith. When Daniel saw other boys going to school he would often cry and pray that God would change his father's heart and lead him to send his son to school. This earnest desire on the part of the young and earnest lad led to an earnest discussion and difference between his parents as to the future policy with their boy. Finally after two month's earnest prayer on the part of the mother and her son the Spirit of God reconciled the opposition of the father and made him willing to send his son to school. Daniel continued his studies in this school four years and read a chapter of the Bible to his parents every night. The father thus became interested and in the second year sent Daniel's two sisters and brother to school. He soon became the first student in the school. Rev. G. Coan when visiting the school embraced Daniel and his sisters and kissed them with the holy kiss of joy as the first fruit of his labors.

After four years this school closed on account of lack of students. There arose a dark cloud of sorrow and disappointment to poor Daniel. What shall I do to continue my studies, was the despairing cry of the consecrated boy. But his strong will soon found a way. He was now sixteen years old. There was a small village of three hundred families called Golpashan two miles distant from his home town. Golpashan contained a high school and a Presbyterian church of three hundred members. Daniel decides to go to school at this place, but again meets opposition from his father, who wants him to stay at home and work for him. But his mother met his father with the strong argument that she had consecrated her child to God before he was born, because God gave him to me after the death of my six children. But the mother lived in continual fear that her son would be devoured by wolves on his way to school and then she said, "I will go down to my grave in a miserable condition." But the son, willing to sacrifice even life itself for study, said, "I will go, mother, trusting in God and your prayers." Events soon proved that the mother's fears were well founded....