Modern Icelandic Plays Eyvind of the Hills; The Hraun Farm 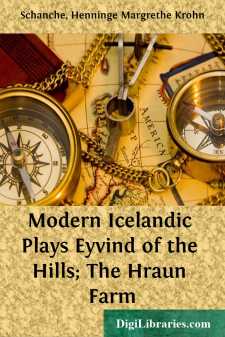 BOTH volumes of the Scandinavian Classics selected to appear in 1916 are by natives of Iceland. They belong, however, to periods of time and to modes of writing remote from each other. Snorri Sturluson, the greatest of Icelandic historians, was born in 1179. His Prose Edda, the companion-piece of the present volume, is a Christian's account of Old Norse myths and poetic conceptions thus happily preserved as they were about to pass into oblivion. More than seven hundred years separate Jóhann Sigurjónsson from Snorri, and his work is in dramatic, not saga form. But even as in outward appearance modern Iceland is not unlike ancient Iceland, so the Icelandic writers of the present have marked kinship with the past. Despite many centuries of relative neglect, the old traditions lived on, cherished by scholars, until now, at the beginning of the twentieth century, the Icelandic mind appears to be again renascent and creative. Einar Jónsson, the sculptor, has his counterpart in the domain of letters in such recent writers as Jónas Jónasson, Emar Hjörleifsson, Gudmundur Magnússon, Jónas Gudlaugsson, Gunnar Gunnarson, and Gudmundur Kamban, while every important fjord and valley can claim its own poet or novelist. As yet, the most distinguished performance of these younger authors is the play printed in this volume, Eyvind of the Hills (Bjærg-Ejvind og hans Hustru), by Jóhann Sigurjónsson. Among literary phenomena Eyvind of the Hills is a surprise, almost as though Iceland woke to find her naked mountains clothed in forest in a night.

Let Sigurjónsson tell his life story in his own words: "I was born June 19, 1880, on a large farm in the northern part of Iceland. Our household numbered about twenty people. A broad stream, well stocked with salmon; on both sides of the river, rocks where thousands of eider-ducks had their nests; a view out over the Atlantic with high cliffs where sea-birds lived; lava-fields with unusual flowers; and in the distance blue mountains; such was the theatre where I acted my childhood pieces and where I wrote my first poems.

"When fourteen years old, I was sent to school at Reykjavik; but after pocketing the diploma of the upper class, my longing led me down to Copenhagen, where I chose the study of veterinary science. For three years I worked zealously at my studies and took all the preliminary examinations required, until suddenly I burned my ships and resolutely threw myself into the work of a playwright. At first one difficulty piled up after another. To begin with, I had to write in a language not my own. And then, what knowledge I had of human nature was limited to a most incomplete knowledge of myself and of a few college chums of my own age. Besides, it was not long before I had to concern myself about mere bread and butter.

"My first victory was an appreciative letter from Björnstjerne Björnson, wherein he promised warmly to recommend me to Gyldendal's, the great publishing house, which subsequently published my first play, Dr....