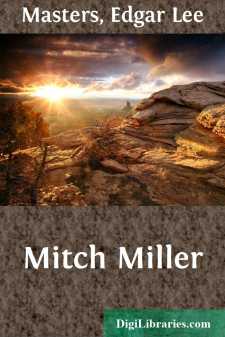 Supposin' you was lyin' in a room and was asleep or pretty near asleep; and bein' asleep you could hear people talkin' but it didn't mean nothin' to you—just talk; and you kind of knew things was goin' on around you, but still you was way off in your sleep and belonged to yourself as a sleeper, and what was goin' on didn't make no difference to you; and really, supposin' you was tryin' to get back into deeper sleep before you heard these things. And then, supposin' now and then as your eyes rolled back into your head while sleepin' you saw through the lids—not tryin' to look, but your eyes just saw as they rolled past the open place between the lids—and you saw squares of light and dark, or maybe roundish blurs. And then supposin' sometimes you heard a noise, and as it turned out it was somebody goin' in and out of the room, or somebody closin' or openin' a door. And supposin' these here people were not tip-toein' exactly, but were kind of watchin' and laughin' a little maybe to see what you would do when you woke up. And finally one of your eyes kind of opened and you saw your ma sittin' in the corner, sewin', or peelin' apples maybe; and you saw your pa goin' out of a door, and your sister came up to you and looked clost to see when you was goin' to wake up. And supposin' after a bit you sat up and rubbed your eyes, and looked around and you was in a room, and the room was in your ma's house, and your ma sat there, sure enough, and your pa was goin' out of the door, and your sister was lookin' at you. And supposin' then you went out-doors and there was a yard and you saw the house from the outside, and there was a house near and other houses, and a fence in front, and wagons goin' by and people. And then supposin' by and by you found out that a railroad ran right by the side fence, and a great big black thing makin' a noise and blowin' out smoke came close to the fence sometimes, and a man would be ridin' in a little house on top of this big black thing, who talked to you, and laughed when you showed him a pipe made out of a cork and a match, and a cherry-seed put in a hollowed-out place of the cork for tobacco.

And then supposin' other children came around, and finally you went out on to a sidewalk and saw lots of houses, and by and by ran away and saw stores all around a lovely square and a great court house in the center. And supposin' you found out that there was a river just under the hills you could see beyond the railroad, and by and by you heard your folks say Petersburg; and by and by you knew that was the name of this town. And sometimes you could see more of the town, because your grandpa and grandma came with a carriage and drove clear through the town so as to get to the country and out to the farm where they lived.

And then supposin' one day all the things in the house was loaded on a wagon and you rode with your ma up the hill to a better house and a bigger yard with oak trees, and the things were put in the house and you began to live here, and saw different houses around, and different children came to play; and supposin' there was a girl named Cooster McCoy that used to come to the fence and make faces and say awful words which your ma told you was wicked and would make God punish you if you said 'em: and then supposin' you began to hear your pa and ma talk of Mr....