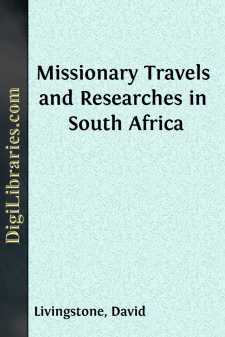 The general instructions I received from the Directors of the London Missionary Society led me, as soon as I reached Kuruman or Lattakoo, then, as it is now, their farthest inland station from the Cape, to turn my attention to the north. Without waiting longer at Kuruman than was necessary to recruit the oxen, which were pretty well tired by the long journey from Algoa Bay, I proceeded, in company with another missionary, to the Bakuena or Bakwain country, and found Sechele, with his tribe, located at Shokuane. We shortly after retraced our steps to Kuruman; but as the objects in view were by no means to be attained by a temporary excursion of this sort, I determined to make a fresh start into the interior as soon as possible. Accordingly, after resting three months at Kuruman, which is a kind of head station in the country, I returned to a spot about fifteen miles south of Shokuane, called Lepelole (now Litubaruba). Here, in order to obtain an accurate knowledge of the language, I cut myself off from all European society for about six months, and gained by this ordeal an insight into the habits, ways of thinking, laws, and language of that section of the Bechuanas called Bakwains, which has proved of incalculable advantage in my intercourse with them ever since.

In this second journey to LepeloleвЂ”so called from a cavern of that nameвЂ”I began preparations for a settlement, by making a canal to irrigate gardens, from a stream then flowing copiously, but now quite dry. When these preparations were well advanced, I went northward to visit the Bakaa and Bamangwato, and the Makalaka, living between 22 Degrees and 23 Degrees south latitude. The Bakaa Mountains had been visited before by a trader, who, with his people, all perished from fever. In going round the northern part of these basaltic hills near Letloche I was only ten days distant from the lower part of the Zouga, which passed by the same name as Lake Ngami;* and I might then (in 1842) have discovered that lake, had discovery alone been my object. Most part of this journey beyond Shokuane was performed on foot, in consequence of the draught oxen having become sick. Some of my companions who had recently joined us, and did not know that I understood a little of their speech, were overheard by me discussing my appearance and powers: "He is not strong; he is quite slim, and only appears stout because he puts himself into those bags (trowsers); he will soon knock up." This caused my Highland blood to rise, and made me despise the fatigue of keeping them all at the top of their speed for days together, and until I heard them expressing proper opinions of my pedestrian powers.