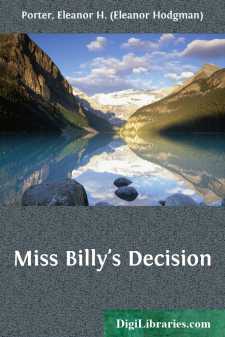 CHAPTER I. CALDERWELL DOES SOME TALKING

Calderwell had met Mr. M. J. Arkwright in London through a common friend; since then they had tramped half over Europe together in a comradeship that was as delightful as it was unusual. As Calderwell put it in a letter to his sister, Belle:

"We smoke the same cigar and drink the same tea (he's just as much of an old woman on that subject as I am!), and we agree beautifully on all necessary points of living, from tipping to late sleeping in the morning; while as for politics and religion—we disagree in those just enough to lend spice to an otherwise tame existence."

Farther along in this same letter Calderwell touched upon his new friend again.

"I admit, however, I would like to know his name. To find out what that mysterious 'M. J.' stands for has got to be pretty nearly an obsession with me. I am about ready to pick his pocket or rifle his trunk in search of some lurking 'Martin' or 'John' that will set me at peace. As it is, I confess that I have ogled his incoming mail and his outgoing baggage shamelessly, only to be slapped in the face always and everlastingly by that bland 'M. J.' I've got my revenge, now, though. To myself I call him 'Mary Jane'—and his broad-shouldered, brown-bearded six feet of muscular manhood would so like to be called 'Mary Jane'! By the way, Belle, if you ever hear of murder and sudden death in my direction, better set the sleuths on the trail of Arkwright. Six to one you'll find I called him 'Mary Jane' to his face!"

Calderwell was thinking of that letter now, as he sat at a small table in a Paris café. Opposite him was the six feet of muscular manhood, broad shoulders, pointed brown beard, and all—and he had just addressed it, inadvertently, as "Mary Jane."

During the brief, sickening moment of silence after the name had left his lips, Calderwell was conscious of a whimsical realization of the lights, music, and laughter all about him.

"Well, I chose as safe a place as I could!" he was thinking. Then Arkwright spoke.

"How long since you've been in correspondence with members of my family?"

"Perhaps you thought of it yourself, then—I'll admit you're capable of it," he nodded, reaching for a cigar. "But it so happens you hit upon my family's favorite name for me."

"Mary Jane! You mean they actually call you that?"

"Yes," bowed the big fellow, calmly, as he struck a light. "Appropriate!—don't you think?"

Calderwell did not answer. He thought he could not.

"Well, silence gives consent, they say," laughed the other. "Anyhow, you must have had some reason for calling me that."

"Arkwright, what does 'M. J.' stand for?" demanded Calderwell.

"Oh, is that it?" smiled the man opposite. "Well, I'll own those initials have been something of a puzzle to people. One man declares they're 'Merely Jokes'; but another, not so friendly, says they stand for 'Mostly Jealousy' of more fortunate chaps who have real names for a handle. My small brothers and sisters, discovering, with the usual perspicacity of one's family on such matters, that I never signed, or called myself anything but 'M....