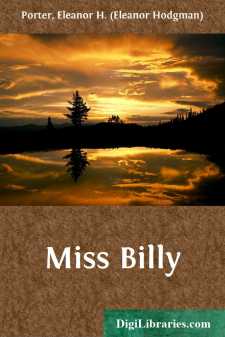 CHAPTER I BILLY WRITES A LETTER

Billy Neilson was eighteen years old when the aunt, who had brought her up from babyhood, died. Miss Benton's death left Billy quite alone in the world—alone, and peculiarly forlorn. To Mr. James Harding, of Harding & Harding, who had charge of Billy's not inconsiderable property, the girl poured out her heart in all its loneliness two days after the funeral.

"You see, Mr. Harding, there isn't any one—not any one who—cares," she choked.

"I'm not so sure of that, either," retorted the man. "I'm thinking that Letty and Ann would LIKE to have you with us."

The girl laughed now outright. She was thinking of Miss Letty, who had "nerves," and of Miss Ann, who had a "heart"; and she pictured her own young, breezy, healthy self attempting to conform to the hushed and shaded thing that life was, within Lawyer Harding's home.

"Thank you, but I'm sure they wouldn't," she objected. "You don't know how noisy I am."

The lawyer stirred restlessly and pondered.

"But, surely, my dear, isn't there some relative, somewhere?" he demanded. "How about your mother's people?"

Billy shook her head. Her eyes filled again with tears.

"There was only Aunt Ella, ever, that I knew anything about. She and mother were the only children there were, and mother died when I was a year old, you know."

"But your father's people?"

"It's even worse there. He was an only child and an orphan when mother married him. He died when I was but six months old. After that there was only mother and Aunt Ella, then Aunt Ella alone; and now—no one."

"And you know nothing of your father's people?"

"Nothing; that is—almost nothing."

"Then there is some one?"

Billy smiled. A deeper pink showed in her cheeks.

"Why, there's one—a man but he isn't really father's people, anyway. But I—I have been tempted to write to him."

"The one I'm named for. He was father's boyhood chum. You see that's why I'm 'Billy' instead of being a proper 'Susie,' or 'Bessie,' or 'Sally Jane.' Father had made up his mind to name his baby 'William' after his chum, and when I came, Aunt Ella said, he was quite broken-hearted until somebody hit upon the idea of naming me Billy.' Then he was content, for it seems that he always called his chum 'Billy' anyhow. And so—'Billy' I am to-day."

"No. You see father died, and mother and Aunt Ella knew him only very slightly. Mother knew his wife, though, Aunt Ella said, and SHE was lovely."

"Hm—; well, we might look them up, perhaps. You know his address?"

"Oh, yes unless he's moved. We've always kept that. Aunt Ella used to say sometimes that she was going to write to him some day about me, you know."

"William Henshaw. He lives in Boston."

Lawyer Harding snatched off his glasses, and leaned forward in his chair.