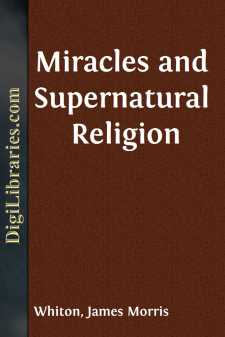 n a historical retrospect greater and more revolutionary changes are seen to have occurred during the nineteenth century than in any century preceding. In these changes no department of thought and activity has failed to share, and theological thought has been quite as much affected as scientific or ethical. Especially remarkable is the changed front of Christian theologians toward miracles, their distinctly lowered estimate of the significance of miracle, their antipodal reverse of the long established treatment of miracles. Referring to this a British evangelical writer observes that "the intelligent believer of our own day, ... instead of accepting Christianity on the ground of the miracles, accepts it in spite of the miracles. Whether he admits these miracles, or rejects them, his attitude toward them is toward difficulties, not helps."

By this diametrical change of Christian thought a great amount of scepticism has already been antiquated. A once famous anti-Christian book, Supernatural Religion, regarded as formidable thirty years ago, is now as much out of date for relevancy to present theological conditions as is the old smooth-bore cannon for naval warfare. That many, indeed, are still unaware of the change that has been experienced by the leaders of Christian thought, no one acquainted with current discussions will deny; the fact is indubitable. It is reviewed in the following pages with the constructive purpose of redeeming the idea of supernatural Religion from pernicious perversion, and of exhibiting it in its true spiritual significance. The once highly reputed calculations made to show how the earth's diurnal revolution could be imperceptibly stopped for Joshua's convenience, and the contention that the Mediterranean produced fish with gullets capable of giving passage to Jonah, are now as dead as the chemical controversy about phlogiston. Yet some sceptical controversialists are still so far from cultivating the acquaintance with recent thought which they recommend to Christian theologians, as to persist in affirmations of amazing ignorance, e.g. "It is admitted that miracles alone can attest the reality of divine revelation." Sponsors for this statement must now be sought among unlearned Christians, or among a few scholars who survive as cultivators of the old-fashioned argument from the "evidences." Even among these latter the tendency to minimize miracle is undeniably apparent in a reduction of the list classified as such, and still more in the brevity of the list insisted on for the attestation of Christianity.

A transitional state of mind is clearly evidenced by the present division and perplexity of Christian thought concerning the Christian miracles. Many seem to regard further discussion as profitless, and are ready to shelve the subject. But this attitude of weariness is also transitional. There must be some thoroughfare to firm ground and clear vision. It must be found in agreement, first of all, on the real meaning of a term so variously and vaguely used as miracle....