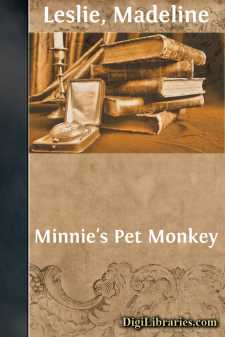 CHAPTER I.JACKO AND HIS WOUNDED TAIL.

Did you ever see a monkey? If you have not, I suppose you will like to hear a description of Jacko, Minnie’s sixth pet.

He was about eighteen inches high, with long arms, covered with short hair, which he used as handily as a boy, flexible fingers, with flat nails, and a long tail, covered with hair, which seemed to answer the purpose of a third hand.

Though monkeys are usually very ugly and unpleasant, from their approaching so nearly to the human face, and still bearing so strongly the marks of the mere brute, yet Jacko was a pretty little fellow.

He had bright eyes, which sparkled like diamonds from beneath his deep-set eyebrows. His teeth were of the most pearly whiteness, and he made a constant display of them, grinning and chattering continually. But I ought to tell you about his passage in uncle Frank’s ship.

On one of Captain Lee’s voyages, he touched upon the coast of Africa, where he saw the little fellow in a hen-coop, just about to be carried on board a whaler. The gentleman had often thought he should like to carry his favorite niece a little pet; but as she already had a parrot, he did not know what she would wish.

But when he listened to the chattering of the monkey, and heard the sailor who owned him say what a funny little animal it was, he thought he would buy it and take it home to her.

On the voyage, Jacko met with a sad accident. The hen-coop in which he was confined was too small to contain the whole of his tail, and he was obliged, when he slept, to let the end of it hang out. This was a great affliction to the poor animal, for he was very proud of his tail, which was indeed quite an addition to his good looks.

It so happened that there were two large cats on board ship; and one night, as they were prowling about, they saw the tail hanging out while Jacko was sound asleep; and before he had time to move, one of them seized it and bit it off.

The monkey was very indignant, and if he could have had a fair chance at his enemies, would have soon punished them for their impudence. It was really amusing to see him afterward. He would pull his bleeding tail in through the bars of the hen-coop, and give it a malicious bite, as much as to say,—

“I wish you were off. You are of no use to me now; and you look terribly short.”

When they reached New York, at the end of their voyage, Captain Lee took Jacko out of the hen-coop, and put him in a bag, which was carried into the depot while he was purchasing his ticket. The monkey, who must needs see every thing that was going on, suddenly poked his head out of the bag, and gave a malicious grin at the ticket-master.

The man was much frightened, but presently recovered himself, and returned the insult by saying,—

“Sir, that’s a dog! It’s the rule that no dog can go in the cars without being paid for.”

It was all in vain that the captain tried to convince him that Jacko was not a dog, but a monkey. He even took him out of the bag; but in the face of this evidence, the man would persist in saying,—

“He is a dog, and must have a ticket before he enters the cars.”

So a ticket was bought, and Jacko was allowed to proceed on his journey.

The little fellow was as pleased as the captain when he arrived at the end of his journey, and took possession of his pleasant quarters in the shed adjoining Mr....