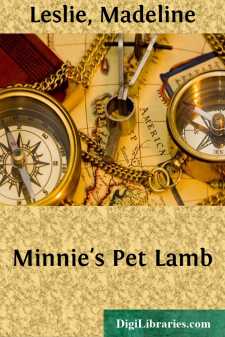 NANNIE AND THE PONY.

In another book, about Minnie’s pet pony, I have already given you some account of Nannie, her pet lamb.

This had all the peculiarities of the South Down, to which breed of sheep it belonged. It had full, bright, black eyes, a small head, and a brownish-gray face and legs. Its back was straight and wide, and covered with fine, short wool, which protected it from the cold.

When Mr. Lee first brought the lamb home, it cried, or bleated, continually. It was placed in a pen close by the stall where Star, the Shetland pony, was kept, and, the next day after it came, managed to get over the light railing which separated them, and creep up close to the animal.

I don’t know what Star thought of the little creature; but I suppose he was pleased to have a companion, for when the hostler went to feed him, he found them on very social terms. After this, the lamb’s affection for Star grew so strong that it soon forgot all about its mother and its old friends, and gave its whole heart to the new one. The pony returned the love, and was as kind to his little companion as he could possibly be. He never seemed better pleased than when the lamb was standing quietly by his side, eating the hay or turnips with which it was fed, or when, its hunger being appeased, it lay down close under his nose, and chewed its cud by the hour together.

At such times, the pony was careful not to step on it, or injure it in any way, but expressed his delight in its society by little short neighs, which were sometimes answered by a responsive note.

In a few days they understood each other perfectly, and were as well acquainted, and as fond of each other, as if they had lived together all their lives.

Mr. Lee, who was visiting Minnie’s pets with his little daughter, said, one morning, it would never do for the lamb to stand in the stall, so closely confined from the out-door air; and he directed John to turn it out into the barn yard for a few hours every day.

The man did so; but the poor lamb bleated at this separation from its friend, until the groom happened to think such a change would do Star good too.

As soon as the lamb saw the horse coming through the barn door, it stopped crying, and ran toward him just as it would if he had been its mother.

Star put down his head to his favorite, when the lamb frisked and gambolled about him, occasionally nibbling at his nose, when he would start back, and, thinking this fine fun, would begin to dance again. O, what a pleasant time they did have!

Every morning, Minnie went with her bowl of milk for Nannie, into which, as the lamb grew older, she crumbled some pieces of bread. It was a pretty sight to see the little creature peeping shyly, with its bright eyes, from behind its friend, and then coming a few steps toward her, when she called, in her low, sweet voice,—

“Nannie! Nannie! come and get your breakfast!”

Then she held the bowl down where the lamb could reach to put its mouth in, and laughed to see how much the pretty pet liked the milk....