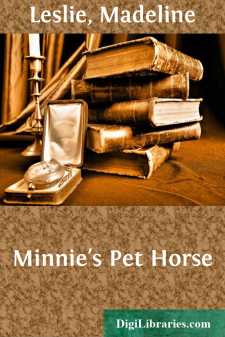 CHAPTER I.THE HORSE AND THE DOG.

In the other books of this little series, I have told you about Minnie’s pet parrot, her pet cat, and her pet dog. In this one, I shall give you an account of her pet pony, and also tell you anecdotes of other horses.

Star was the name she gave her Shetland pony, I suppose because he had a white star on his forehead, which showed very distinctly from the contrast with his dark bay hair.

He was about three feet high, with a short neck and a long black tail. He was very affectionate and gentle, loving his little mistress, and neighing pleasantly whenever he heard her voice.

The little girl seldom went out to the stable without asking the cook for a piece of bread for Star. Sometimes she did not give it to him at once, but hid it under her apron. The pony soon learned this trick, and, if the bread was not forthcoming, lifted the apron with his teeth, whining like a child, until she put it in his mouth.

During the summer months, Star was kept in the pasture, where the grass was very green. When he was thirsty, there was a clear, running brook at the end of the pasture, where he could go and drink. If the weather was very hot, he liked to go and stand in the water and cool himself.

Star had a companion to stay with him in the pasture, and help him eat the young, sweet clover. This was Nannie, the lamb, who never, if she could help it, was out of his sight for a moment. Wherever Star went, Nannie tried to go too; or, if she could not, she bleated continually, refusing to eat until his return.

Mr. Lee’s place contained near a hundred acres. There was a farm house about two hundred rods from the mansion, and a nicely gravelled road leading past the lawn through the garden, connecting them.

Here, almost every pleasant morning, Minnie could be seen trotting her little pony back and forth, and Nannie running along by his side. After a few months, Star became so well accustomed to his young mistress, that he would walk by himself from the stable door, when the groom had buckled on the saddle, to the bottom of the stone steps where she used to mount. Her father soon taught her to put her foot in the stirrup, and mount by herself; and Star would stand quite still, turning his head to see when she was ready; then, when she tightened the reins, and said in her pleasant tones, “Come, pony!” away he would go down the avenue, trotting or cantering, just as suited her best.

As Minnie grew older, her mother sometimes trusted her to go to the village store of an errand; or, if the servants were busy, and there was a letter to be posted, there was nothing easier than for Minnie to run to the gate leading into the pasture, and call out, “Star! Star!!” Then he would come up to the house, following her like a dog, and wait to be saddled.

In the winter the pony occupied a stall in the neat, warm stable; and there, curled down by his side, Nannie lay too, doing her best to keep her favorite warm with her long fleece.

Minnie thought Star a very knowing horse, and she loved to tell her father and mother all the cunning things he did, and how glad he always was to see her, when she went to visit him.

Sometimes her father told her stories of other ponies. I suppose you would like to hear some, and I will tell them to you....