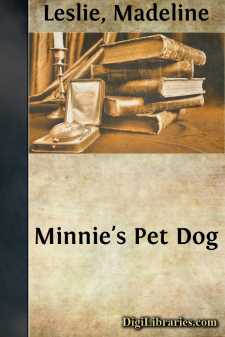 Tiney was a spaniel. He had long, pendent ears, black, expressive eyes, a short, well-rounded mouth, and long, silky hair. He was an affectionate little fellow, who attached himself to every body in the house. He was on the most friendly terms with Fidelle, often eating sociably with her from the same plate. In summer, when Minnie liked to play on the lawn, Tiney might be seen running here and there in obedience to his young mistress, picking up a ball or stick, and bringing it to her in his teeth.

If the truth must be told, Tiney was a dog that loved his own ease. In the winter he liked to lie on the hearth rug in front of the glowing fire, one eye partly open, to be sure that Fidelle, who was fond of playing with his tail, committed no indignities with it.

Sometimes Minnie used to get out of patience with him for being so sleepy; but her mother told her it was in consequence of his eating so heartily, and taking no more exercise; and then the little girl would drag him off out of doors, often sadly against his will, and entice him into a frolic.

It was curious to see Tiney with Leo. The spaniel held the great dog in awe, and never but once was known to go to the stable to see him.

The circumstances that led to this visit were very curious, and I must relate them.

When Tiney first saw Leo, he was only a puppy, and I suppose was frightened at the sight of so large a dog. He began to bark at him with all his might. Mr. Lee wished to have them become friends; but this did not appear so easy, for Leo, after looking disdainfully at the pup, walked away with great dignity.

After this, whenever Tiney saw him, he began to bark, or rather to growl; but Leo never took the least notice of him.

Tiney, however, was fond of running to the gate to see what dogs were passing by. In this way, he formed many acquaintances, and some very bad ones.

An express-man used to pass the house two or three times a week, and was always accompanied by a large mastiff, a savage-looking dog, with a deep bass voice.

One day, when the express-man’s wagon was going by, Tiney began to jump up before the horses’ mouths and bark. The man spoke to the mastiff, who at once flew at the spaniel, and shook him thoroughly.

Tiney cried out piteously, and walked back to the house a sadder if not a wiser dog.

But he did not forget. On the day when the express-man passed again, he paid the visit, I have mentioned, to Leo, and in some way made him understand that he wanted to engage his services.

Leo agreed to revenge the insult that had been offered the little fellow. When the mastiff came by, they were ready for him. Tiney did the barking, while his defender caught the mastiff, and whipped him severely.

Leo and Tiney then returned to the house together, when the spaniel showed his gratitude by running back and forth before his friend, and giving several short barks. But what was most remarkable was the fact, that after this they returned to their old footing, Leo never condescending to take any notice of his smaller companion, and Tiney giving an occasional growl when he saw him approach....