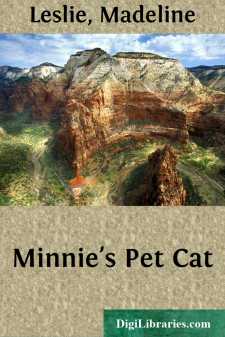 She was an elegant creature. Her fur was of moderate length, of pure black, white, and reddish orange. Her eyes were large, bright, and affectionate in expression. Her form was delicate, and her motions active. In character, she was the most attached, graceful little puss I ever knew.

The moment Fidelle heard Minnie’s voice, she walked to the door, and was ready to welcome her, rubbing her glossy sides against the child’s feet, and making little soft notes of pleasure.

Sometimes Minnie had the headache, or was tired, and lay upon the sofa; when she did so, Fidelle loved to jump up and walk softly over the little figure until she came to her mistress’s face, when she quietly lay down near by, or sometimes licked her hand lovingly. She never did this to Mrs. Lee, or any other member of the family.

Fidelle was an active puss, and often went bird-catching, or mousing during the night; but generally, when Minnie opened the door of her chamber in the morning, there was Fidelle ready to receive her.

During the warm weather, it was Minnie’s habit to take an early stroll with her father through the grounds, or to accompany him to the nursery, garden, and orchards, when he went to give orders to the men who worked for him.

On such occasions, Fidelle was always on hand, sometimes running along by her side, and then skipping to the top of a tree, or gamboling on before her.

When Minnie was very small, she often used to hug the kitten so tightly as, no doubt, to cause the little creature pain; and then, in running around the room after it, the young miss used to catch it by the tail; but Fidelle never resisted, nor, if hurt, revenged herself. She seemed to understand that Minnie loved her, and that it was her duty to submit quietly to all the caprices of her young mistress.

One day, when the child was about four years old, a rude boy came, with his mother, to visit her. Seeing Fidelle frolicking about the room, highly delighted with a ball of thread, into which she had got her dainty little feet entangled, Wallace caught the cat by the tail, and held her by it in the air.

Minnie screamed with all her might, as she flew to the rescue of her pretty pet.

“Go right away, you ugly boy!” she cried out. “Poor Fidelle! darling kitty! I won’t let you be hurt so.”

Puss remembered the insult and abuse. Whenever she saw Wallace coming toward her, she hid herself behind the sofa; and once, when he came suddenly upon her, she gave him a long, deep scratch on his hand.

Minnie never after liked this boy; and once, when Mrs. Lee was intending to invite his mother to repeat her visit, the child begged earnestly that Wallace might be left at home, saying, “He is so cruel to Fidelle, I can’t bear to have him here.”

I told you, in the other book about Minnie’s pet parrot, that she used often to ride with her mother in the afternoon. There was nothing she liked better than to take Fidelle and Tiney out with her. Sometimes Mrs. Lee allowed this; but when she was intending to make calls she feared the pets would be troublesome.

Fidelle was greatly disappointed when she could not go. She would ask as well as she knew how, and I dare say some of her mews were promises to be good; but Mrs....