Mink Trapping A Book of Instruction Giving Many Methods of Trapping-A Valuable Book for Trappers. 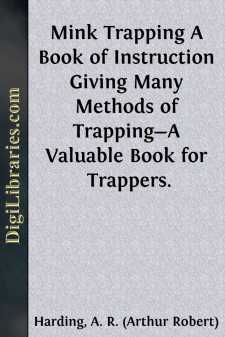 Mink are found in nearly all parts of America living along creeks, rivers, lakes and ponds. While strictly speaking they are not a water animal, yet their traveling for food and otherwise is mainly near the water, so that the trapper finds this the best place to set his traps.

The mink is fond of fish, rabbit, squirrel, birds, mice, etc. In some sections they eat muskrat, but we believe they prefer other animals, only eating muskrat when very hungry and other game is scarce.

At certain seasons scent seems to attract them while at other times the flesh of the rabbit, bird or fish will attract them. The trapper who makes mink trapping a business should have various kinds of traps and sets for them, such as steel traps, both bait and blind sets, as well as deadfalls.

Mink, while small, are quite strong for their size and very active. While a No. 0 Newhouse will hold them, the No. 1 is usually considered the proper trap.

As already mentioned, mink travel a great deal near water, so that the place to catch them is close to the water or in the water. If you notice mink tracks near the water, in some narrow place where the bank comes nearly to the water or a rock or log projects nearly to the water, carefully dig a hole the size of your trap and an inch or more deep, covering with a large leaf or a piece of paper first. Then place a thin layer of earth removed over leaf or paper, making the set look as natural as before. The dirt from the hole for trap as taken out should be thrown in the water or to one side. One of the great secrets in mink trapping, especially blind sets, is to leave things as near as possible as they were before the set was made.

There are various shades of mink--some quite dark, others brown, pale, and some cotton. The greater number, however, are brown. In the Northeast, Maine, etc., mink are not large, but the color is rather dark. In the same latitude some ten or twelve hundred miles west in Minnesota and Manitoba, Canada mink are larger but not so dark. Still further west on the coast of Washington mink are again smaller, being somewhat similar in size to the Maine mink but much lighter in color. Throughout the central section such as Ohio, Indiana, Illinois, Iowa, etc., they are larger than the Maine mink but smaller than Minnesota. In color not near so dark as the Eastern or Maine mink.

The cotton mink is found principally in the prairie and level sections. In general appearance it is much the same as a pale or light brown mink, but on blowing into the fur the under portion is white, hence cotton. Such skins are worth much less than the brown and dark ones. In fact, for years cotton mink sold for 10 to 50 cents.

During the past years the value of mink skins has varied a great deal. The number exported annually varies from a couple of hundred thousand to a half million skins or more. This gives but a faint idea of the annual catch, for large numbers are used each year by American manufacturers.

There has been a great deal said about mink climbing trees, many being under the impression that they could not or did not unless leaning trees....