Mind and Motion and Monism 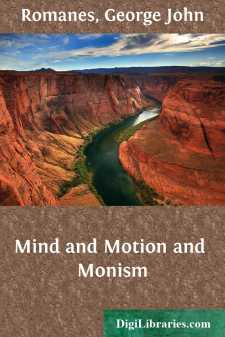 The earliest writer who deserves to be called a psychologist is Hobbes; and if we consider the time when he wrote, we cannot fail to be surprised at what I may term his prevision of the most important results which have now been established by science. He was the first clearly to sound the note which has ever since constituted the bass, or fundamental tone, of scientific thought. Let us listen to it through the clear instrumentality of his own language:—

'All the qualities called sensible are, in the object which causeth them, but so many motions of the matter by which it presseth on our organs diversely. Neither in us that are pressed are they anything else but divers motions; for motion produceth nothing but motion.... The cause of sense is the external body or object, which presseth the organ proper to each sense, either immediately, as in taste and touch, or mediately, as in hearing, seeing, and smelling; which pressure, by the mediation of the nerves, and other strings and membranes of the body, continued inwards to the brain and heart, causeth there a resistance, or counter-pressure, or endeavour.... And because going, speaking, and the like voluntary motions, depend always upon a precedent thought of whither, which way, and what; it is evident that the imagination [or idea] is the first internal beginning of all voluntary motion. And although unstudied men do not conceive any motion at all to be there, where the thing moved is invisible; or the space it is moved in is, for the shortness of it, insensible; yet that doth not hinder, but that such motions are. These small beginnings of motion, within the body of man, before they appear in walking, speaking, striking, and other visible actions, are commonly called ENDEAVOUR.'

These quotations are sufficient to show that the system of Hobbes was prophetic of a revelation afterwards declared by two centuries of scientific research. For they show how plainly he taught that all our knowledge of the external world is a knowledge of motion; and, again, that all our acquisitions of knowledge and other acts of mind themselves imply, as he elsewhere says, some kind of 'motion, agitation, or alteration, which worketh in the brain.' That he conceived such motion, agitation, or alteration to be, from its extreme minuteness, 'invisible' and 'insensible,' or, as we should now say, molecular, is likewise evident. I can therefore imagine the delight with which he would hear me speak when I say, that it is no longer a matter of keen-sighted speculation, but a matter of carefully demonstrated fact, that all our knowledge of the external world is nothing more than a knowledge of motion. For all the forms of energy have now been proved to be but modes of motion; and even matter, if not in its ultimate constitution vortical motion, at all events is known to us only as changes of motion: all that we perceive in what we call matter is change in modes of motion. We do not even know what it is that moves; we only know that when some modes of motion pass into other modes, we perceive what we understand by matter. It would take me too long to justify this general statement so that it should be intelligible to every one; but I am confident that all persons who understand such subjects will, when they think about it, accept this general statement as one which is universally true. And, if so, they will agree with Hobbes that all our knowledge of the external world is a knowledge of motion.

Now, if it would have been thus a joy to Hobbes to have heard to-day how thoroughly he has been justified in his views touching the external world, with no less joy would he have heard that he has been equally justified in his views touching the internal world. For it has now been proved, beyond the possibility of dispute, that it is only in virtue of those invisible movements which he inferred that the nervous system is enabled to perform its varied functions.

To many among the different kinds of movement going on in the external world, the animal body is adapted to respond by its own movements as best suits its own welfare; and the mechanism whereby this is effected is the neuro-muscular system....