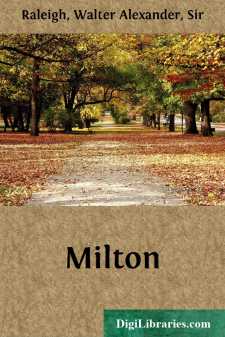 Francis Bacon, in one of his prose fragments, draws a memorable distinction between "arts mechanical" and "sciences of conceit." "In arts mechanical," he says, "the first device comes shortest, and time addeth and perfecteth. But in sciences of conceit the first author goeth farthest, and time leeseth and corrupteth.... In the former, many wits and industries contributed in one. In the latter, many men's wits spent to deprave the wit of one."

I fear that literary criticism of the kind that I propose to myself in these chapters on Milton must be classified with the "sciences of conceit." Indeed, Bacon puts it out of question that he himself would so have regarded it, for he goes on to explain how, after the deliverances of a master, "then begin men to aspire to the second prizes, to be a profound interpreter and commentor, to be a sharp champion and defender, to be a methodical compounder and abridger. And this is the [2] unfortunate succession of wits which the world hath yet had, whereby the patrimony of all knowledge goeth not on husbanded and improved, but wasted and decayed."

The blow is aimed at the scholastic philosophers, but it falls heavy on the critics of literature, on all who "aspire to the second prizes," or who think "that a borrowed light can increase the original light from whom it is taken." It is a searching arraignment of all who set themselves to expound in words the meaning and purpose of a master of verbal expression. Yet the very breadth of the indictment brings comfort and a means of escape. For the chief difficulties of an attempt to understand and judge Milton are difficulties inherent in the nature, not only of all criticism in the large sense, but also of all reading. In this association with great spirits which we call reading we receive but what we give, and take away only what we are fit to carry. Milton himself has stated the doctrine in its most absolute form, and has sought an enhanced authority for it by attributing it to the Christ--

Who reads Incessantly, and to his reading brings not A spirit and judgment equal or superior (And what he brings what needs he elsewhere seek?) Uncertain and unsettled still remains, Deep versed in books and shallow in himself, Crude or intoxicate, collecting toys[3] And trifles for choice matters, worth a spunge, As children gathering pebbles on the shore.

Literally taken, this is the negation of all the higher functions of criticism, and the paralysis of all learning. Only his peers, it is argued, can read Shakespeare intelligently; and, as if that did not give him few enough readers, they are further told that they will be wasting their time! But love, unlike this proud Stoicism, is humble, and contented with a little. I would put my apology in the language of love rather than of philosophy. I know that in Shakespeare, or in Milton, or in any rare nature, as in Faire Virtue, the mistress of Philarete--

There is some concealèd thing So each gazer limiting, He can see no more of merit Than beseems his worth and spirit....
Show more
Show less