Milly Darrell and Other Tales 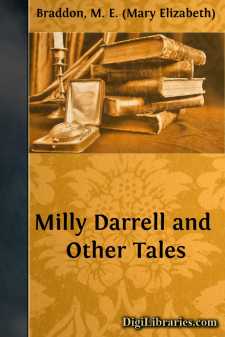 CHAPTER I. I BEGIN LIFE.

I was just nineteen years of age when I began my career as articled pupil with the Miss Bagshots of Albury Lodge, Fendale, Yorkshire. My father was a country curate, with a delicate wife and four children, of whom I was the eldest; and I had known from my childhood that the day must come in which I should have to get my own living in almost the only vocation open to a poor gentleman's daughter. I had been fairly educated near home, and the first opportunity that arose for placing me out in the world had been gladly seized upon by my poor father, who consented to pay the modest premium required by the Miss Bagshots, in order that I might be taught the duties of a governess, and essay my powers of tuition upon the younger pupils at Albury Lodge.

How well I remember the evening of my arrival!—a bleak dreary evening at the close of January, made still more dismal by a drizzling rain that had never ceased falling since I left my father's snug little house at Briarwood in Warwickshire. I had had to change trains three times, and to wait during a blank and miserable hour and a quarter, or so, at small obscure stations, staring hopelessly at the advertisements on the walls—advertisements of somebody's life-sustaining cocoa, and somebody else's health- restoring cod-liver oil, or trying to read the big brown-backed Bible in the cheerless little waiting-room; and trying, O so hard, not to think of home, and all the love and happiness I had left behind me. The journey had been altogether tiresome and fatiguing; but, for all that, the knowledge that I was near my destination brought me no sense of pleasure. I think I should have wished that dismal journey prolonged indefinitely, if I could thereby have escaped the beginning of my new life.

A lumbering omnibus conveyed me from the station to Albury Lodge, after depositing a grim-looking elderly lady at a house on the outskirts of the town, and a dapper-looking little man, whom I took for a commercial traveller, at an inn in the market-place. I watched the road with a kind of idle curiosity as the vehicle lumbered along. The town had a cheerful prosperous air even on this wet winter night, and I saw that there were two fine old churches, and a large modern building which I supposed to be the town-hall.

We left the town quite behind us before we came to Albury Lodge; a very large house on the high-road, a square red-brick house of the early Georgian era, shut in from the road by high walls. The great wrought-iron gates in the front had been boarded up, and Albury Lodge was now approached by a little wooden side-door into a stone- flagged covered passage that led to a small door at the end of the house. The omnibus-driver deposited me at this door, with all my worldly possessions, which at this period of my life consisted of two rather small boxes and a japanned dressing-case, a receptacle that contained all my most sacred treasures.

I was admitted by a rather ill-tempered-looking housemaid, with a cap of obtrusive respectability and a spotless white apron....