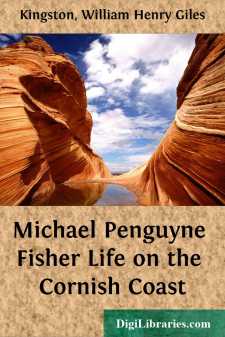 As the sun rose over the Lizard, the southernmost point of old England, his rays fell on the tanned sails of a fleet of boats bounding lightly across the heaving waves before a fresh westerly breeze. The distant shore, presenting a line of tall cliffs, towards which the boats were steering, still lay in the deepest shade.

Each boat was laden with a large heap of nets and several baskets filled with brightly-shining fish.

In the stern of one, tiller in hand, sat a strongly-built man, whose deeply-furrowed countenance and grizzled hair showed that he had been for many a year a toiler on the ocean. By his side was a boy of about twelve years of age, dressed in flushing coat and sou’wester, busily employed with a marline-spike, in splicing an eye to a rope’s-end.

The elder fisherman, now looking up at his sails, now stooping down to get a glance beneath them at the shore, and then turning his head towards the south-west, where heavy clouds were gathering fast, meanwhile cast an approving look at the boy.

“Ye are turning in that eye smartly and well, Michael,” he said. “Whatever you do, try and do it in that fashion. It has been my wish to teach you what is right as well as I know it. Try not only to please man, my boy, but to love and serve God, whose eye is always on you. Don’t forget the golden rule either: ‘Do to others as you would they should do to you.’”

“I have always wished to understand what you have told me, and tried to obey you, father,” said the boy.

“You have been a good lad, Michael, and have more than repaid me for any trouble you may have caused me. You are getting a big boy now, though, and it’s time that you should know certain matters about yourself which no one else is so well able to tell you as I am.”

The boy looked up from his work, wondering what Paul Trefusis was going to say.

“You know, lad, that you are called Michael Penguyne, and that my name is Paul Trefusis. Has it never crossed your mind that though I have always treated you as a son—and you have ever behaved towards me as a good and dutiful son should behave—that you were not really my own child?”

“To say the truth, I have never thought about it, father,” answered the boy, looking up frankly in the old man’s face. “I am oftener called Trefusis than Penguyne, so I fancied that Penguyne was another name tacked on to Michael, and that Trefusis was just as much my name as yours. And oh! father, I would rather be your child than the son of anybody else.”

“There is no harm in wishing that, Michael; but it’s as well that you should know the real state of the case, and as I cannot say what may happen to me, I do not wish to put off telling you any longer. I am not as strong and young as I once was, and maybe God will think fit to take me away before I have reached the threescore years and ten which He allows some to live. We should not put off doing to another time what can be done now, and so you see I wish to say what has been on my mind to tell you for many a day past, though I have not liked to say it, lest it should in any way grieve you....