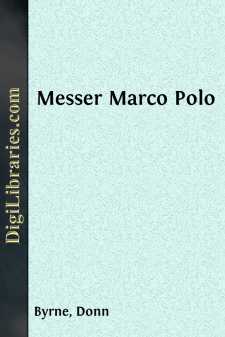 The message came to me, at the second check of the hunt, that a countryman and a clansman needed me. The ground was heavy, the day raw, and it was a drag, too fast for fun and too tame for sport. So I blessed the countryman and the clansman, and turned my back on the field.

But when they told me his name, I all but fell from the saddle.

But he wasn't dead. He was in New York. He was traveling from the craigs of Ulster to his grandson, who had an orange-grove on the Indian River, in Florida. He wasn't dead. And I said to myself with impatience, "Must every man born ninety years ago be dead?"

"But this is a damned thing," I thought, "to be saddled with a man over ninety years old. To have to act as GARDE-MALADE at my age! Why couldn't he have stayed and died at home? Sure, one of these days he will die, as we all die, and the ghost of him will never be content on the sluggish river, by the mossy trees, where the blue herons and the white cranes and the great gray pelicans fly. It will be going back, I know, to the booming surf and the red-berried rowan-trees and the barking eagles of Antrim. To die out of Ulster, when one can die in Ulster, there is a gey foolish thing..."

But the harsh logic of Ulster left me, and the soft mood of Ulster came on me as I remembered him, and I going into the town on the train. And the late winter grass, of Westchester, spare, scrofulous; the jerry-built bungalows; the lines of uncomely linen; the blatant advertising boards—all the unbeauty of it passed away, and I was again in the Antrim glens. There was the soft purple of the Irish Channel, and there the soft, dim outline of Scotland. There was the herring school silver in the sun, and I could see it from the crags where the surf boomed like a drum. And underfoot was the springy heather, the belled and purple heather...

And there came to me again the vision of the old man's thatched farmhouse when the moon was up and the bats were out, and the winds of the County Antrim came bellying down the glens... The turf fire burned on the hearth, now red, now yellow, and there was the golden light of lamps, and Malachi of the Long Glen was reciting some poem of Blind Raftery's, or the lament of Pierre Ronsard for Mary, Queen of Scots:

There is a ribbon from my only love in my pocket deep,And the women of Europe they could not cure my grief, alas!I am done with you until a narrow coffin be made for me.And until the grass shall grow after that up through my heart!

And I suddenly discovered on the rumbling train that apart from the hurling and the foot-ball and the jumping of horses, what life I remembered of Ulster was bound up in Malachi Campbell of the Long Glen...

A very strange old man, hardy as a blackthorn, immense, bowed shoulders, the face of some old hawk of the mountains, hair white and plentiful as some old cardinal's....