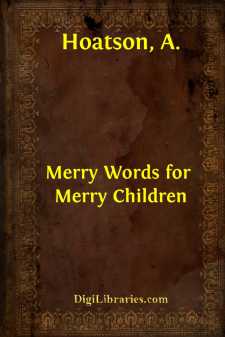 JIM was a boy who was fond of clowns,And thought they were excellent fun;He talked so much of them and their ways,That one night he dreamed he was one.

He dreamed he was feeding five fat geeseOn boiled slate-pencils and rice:He said it was wholesome food for geese,But they said, “More wholesome than nice.”

HE dreamed that he set two geese to dance,While he took a fiddle and played.He said, “You look pretty and gay, my dears.”“We feel very tired,” they said.

“What, tired!” he said, “with that nice pink sash,“And that waistcoat of vivid blue?”Then he tried to teach them the way to sing—A thing geese never can do.

HE made them try to stand on their headsAnd wave their feet in the air,Although they said the pain in their necksWas more than a goose could bear.

He said that it didn’t hurt his back—He liked it, for his part;And all the geese declared he hadA most unfeeling heart.

HE knocked the bottom out of the potThat had held the pencil-stew,And held it in the air while fiveReluctant geese jumped through.

They said they burned their wings and feetWith the sides of the smoking pot.He laughed, “Oh, nonsense! Now, my dears,“We’ll try something really hot.”

SO he made a terrified goose jump throughA hoop all blazing alight,While all the rest of the geese stood roundAnd screamed with all their might.

And he was just about to tryTo teach them how to swim,When all the geese made up their mindsThey’d have some games with him.

THEY put him on a spit, to roastBefore a blazing fire;And one fat goose with bellows blew,To make the flame go higher.

He woke up shrieking with fear and pain,And, as he cuddled downBetween the sheets, he vowed he’d neverBecome a cruel clown.

HAS anyone heard of the wonderful raceOf the frogs and the greyhounds, the rabbits and cats?They rode it on bicycles, sixteen in all,And the umpires were pugs, with cigars and high hats.

And the number of each kind of racer was four—Four frogs dressed in green, four rabbits in brown,Four greyhounds well brushed and with spotless shirt-fronts,Four pussies with tails hanging gracefully down.

The frogs came up first, with their legs straddled wide.

THE four solemn puggies inspected them allAnd weighed them as gravely as if they were dead.“The rabbits must carry the dinners for all;It’s a fair handicap, as they’re quickest,” they said.

(I’ve heard that the rabbits were angry at this;And I think that it’s true, for they never were seenAny more by the umpires, although the cats sayThey frequently meet them at night on the green.)

Then up came the greyhounds

AND now they are ready, and “Go!” cried the firstOf the four solemn pugs as he lit his cigar.“I shall act for the rabbits; you choose from the rest,And carefully watch who first passes the bar.”

“The cats shall be mine,” says the fourth with a wagOf his tightly curled tail as he sat on the grass.“I speak for the frogs,” said the third, “for I’m sureThey’re cunning enough to let nobody pass.”

The rabbits rode off with the food to the woods

SO the greyhounds are mine, then,” says pug Number Two,And he put his blue spectacles on, and he sighed,“I know they’ll not win, though they’ll all do their best,For nobody ever has taught them to ride.”

The frogs came up first, with their legs straddled wideOn the bicycle handles, their arms folded tight;Their umpire, the third little pug, gave a shout,And pushed his hat back in his joy at the sight.