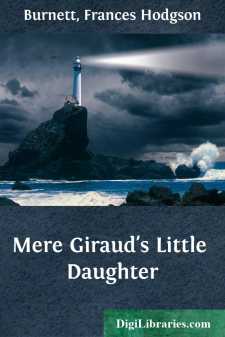 "Prut!" said Annot, her sabots clattering loudly on the brick floor as she moved more rapidly in her wrath. "Prut! Madame Giraud, indeed! There was a time, and it was but two years ago, that she was but plain Mere Giraud, and no better than the rest of us; and it seems to me, neighbors, that it is not well to show pride because one has the luck to be favored by fortune. Where, forsooth, would our 'Madame' Giraud stand if luck had not given her a daughter pretty enough to win a rich husband?"

"True, indeed!" echoed two of the gossips who were her admiring listeners. "True, beyond doubt. Where, indeed?"

But the third, a comely, fresh-skinned matron, who leaned against the door, and knitted a stout gray stocking with fast-clashing needles, did not acquiesce so readily.

"Well, well, neighbors," she said, "for my part, I do not see so much to complain of. Mère Giraud—she is still Mère Giraud to me—is as honest and kindly a soul as ever. It is not she who has called herself Madame Giraud; it is others who are foolish enough to fancy that good luck must change one's old ways. If she had had the wish to be a grand personage, would she not have left our village before this and have joined Madame Legrand in Paris. On the contrary, however, she remains in her cottage, and is as good a neighbor as ever, even though she is fond of talking of the carriages and jewels of Madame Legrand and her establishment on the Boulevard Malesherbes. In fact, I ask you, who of us would not rejoice also to be the mother of a daughter whose fortune had been so good?"

"That also is true," commented the amiable couple, nodding their white-capped heads with a sagacious air. "True, without doubt."

But Annot replied with a contemptuous shrug of her shoulders:—

"Wait until Madame Giraud is invited to visit the Boulevard Malesherbes," she said. "We have not heard that this has happened yet."

"She would' not go if she were, at least not to remain. Her heart has grown to the old place she bore her children in, and she has herself said to me most sensibly: 'Laure is young, and will learn easily the ways of the great world; I am old, and cannot; I am better at home among my neighbors.' Doubtless, however, In course of time she will pay Madame Legrand a visit at her home in Paris, or at the château which Monsieur Legrand of course possesses, as the rich and aristocratic always do."

Honest Jeanne Tallot passed the sneer by, and went on with stout gravity of demeanor:—

"There is only one thing for which I somewhat blamed Mère Giraud, and that is that I think she has scarcely done her duty toward Valentin. He disappointed her by being an ugly lad instead of a pretty girl, and she had not patience with him. Laure was the favorite. Whatever Laure did was right, and it was not so with the other, though I myself know that Valentin was a good lad, and tender-hearted."

"Once," put in a white cap, "I saw her beat him severely because he fell with the little girl in his arms and scratched her cheek, and it was not his fault. His foot slipped upon a stone. He was carrying the child carefully and tenderly enough. You are right in calling him a good lad, neighbor Tallot. He was a good lad,—Valentin Giraud,—and fond of his mother, notwithstanding that she was not fond of him."

"Yes," added her companion; "but it is a truth that he was a great contrast to the girl. Mon Dieu! his long limbs and awkward body, his great sad eyes and ugly face!...