Men of the Bible; Some Lesser-Known Characters 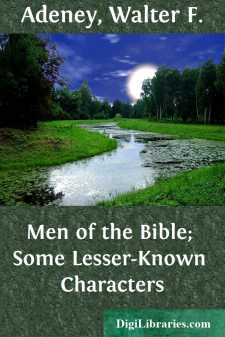 "He walked with God."

Therefore he knew God. The articles of his creed were not many, but he was fixed on this foundation-truth of all religion. Further than this, he knew God as taking a living interest in His creatures, as one who could be approached by them in prayer and communion, and who was sympathetically responsive to their needs. He somehow knew God, also, as being righteous and holy, and he must have had a rudimentary idea of the Christ, as it unfolded itself in the great promise of a deliverer from evil made to our first parents in Paradise. However scanty in number were the articles of his creed, they were not scanty in results. They produced a great life and a great name. The results were that "he walked with God." Walking is the habitual exercise of a man's life. A man runs sometimes. Under great strain, or the demand of special circumstances, he runs, but finds that exhaustion follows; or if he runs too frequently, total collapse is the inevitable consequence. Two of the most eminent ministers of our times recently died owing to overstrain and over-exertion. But we have some now living who have done signal service for the Church during a ministry of fifty years, and who are still hale and having a green old age. To walk at a steady pace, fulfilling life's responsibilities and the demands of duty, is to fulfil the will of God and serve our generation. This rule refers to man's religious and spiritual life. To walk onward and upward in the highest things is to grow in excellence and grace.

As man is a social being, he must walk with someone in life. Perpetual solitude dries up the springs of existence, and true manhood is shrivelled up. Solitary confinement is the saddest and cruellest punishment that can be inflicted by man on his fellow. The prisoner in the Bastille, when his reason reeled through prolonged silence and loneliness, was saved from mental collapse by the friendship of a rat; and a similar story is told of an English prisoner, who, under similar circumstances, found solace in the company of a pigeon. Man craves for fellowship and friendship. Happiest is he who has the noblest companion. God alone fills the deep craving of the heart for a congenial and helpful presence, and Enoch "walked with God." The words imply regular, unbroken, well-sustained communion with Him. With a sublime and lofty aspiration Enoch had risen above shadows, idols, and pretences, and with simple, manly faith had grasped the unseen substance and reality, the personal God, the Father of us all.

This "walking with God" may be fairly inferred to have been carried out in all the affairs of life. The statement has no exceptions in it. Other saints have their failings and sins recorded with an admirable candour, but we are left to conclude that this was a saint of pure life and character. In tending his flocks and herds, in carrying out the barter of the markets in the early world, in commanding his children and ordering his household, in preaching righteousness and foretelling judgment, the great law of his life was here, "walking with God."

When such unbroken intercourse with God is maintained, all duty and labour have a new meaning, and are suffused with a new glory....