by Elwyn A. (Elwyn Allen) Smith 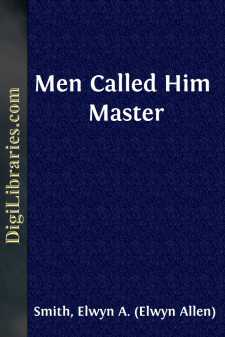 HAVE YOU EVER WONDERED?

What kind of men were Jesus' disciples? What was it like to be with Jesus in Palestine? Why did some of the disciples find it so hard to understand Jesus? Who were the people who killed Jesus? Why did they do it? This book has been written to help you to answer these questions. It takes you right into Jesus' world so that you can hear his conversations with the disciples and watch the things they did.

The stories of Jesus and the disciples in this book are told in different words from those you will find in your Bible, and background has been built in from other records of the time. For example, the Bible gives only the fact that one of the disciples was a Zealot; in this book the disciple is shown speaking and acting as we know Zealots spoke and acted. The story of the rich young ruler has been placed early in Jesus' ministry to show that he would not accept every man who wanted to be his disciple. The parable of the Good Samaritan has also been placed in the early period as an example of the informal way in which Jesus taught. That you may know what is from the Bible and what is added to make a complete story, Scripture references for each event are given in the back of the book. These references will help you to read and understand the Gospels. As you read what it meant to be a disciple of Jesus while he was on earth, you will see more clearly what it means to be one of his disciples today.

1. A VOICE IN THE WILDERNESS

"Andrew! The baskets are slipping!" Two men on foot were driving heavily loaded donkeys ahead of them. Across the back of Andrew's tiny beast hung two huge baskets. One slanted crazily forward.

"It ought to hold until we get to the top," answered Andrew. He looked critically at the load and then at the path ahead. They were climbing the bank of a wide gully cut by the floods that rushed down from the barren hills into the valley of the Jordan River every spring. Andrew shouted a command and the donkeys climbed slowly upward. At the top the men stopped to catch their breath.

"John," exclaimed Andrew in disgust, "I have tightened this thing on every hill between Galilee and Judea!" He worked impatiently at the knotted ropes that bound the baskets on the donkey's back. John was not listening. He was gazing at the scene before them.

Torrents of muddy water poured through the gully during the season of rains. Now the clay in the bottom was dry and cracked. Under the hoofs of the animals it was as hard as stone. John pushed his damp hair back from his forehead. His home province, with its green hillsides surrounding the cool Lake of Galilee, was very different from this burnt, rocky land of Judea, which lay southwest of where they stood. The gully carried a sluggish stream of heated air up from the valley; he could feel the damp warmth on his skin. Even on the hilltop there was no cooling breeze.

Andrew wiped his face with a dusty sleeve and left a dirty streak above his brows. "There!" he exclaimed. "These baskets ought to stay on now." The rope was drawn tightly around the belly of the donkey.

"We should be at Bethany soon," remarked John.

Andrew struck the donkey with his whip and said gruffly, "Come on!" as though the animal had shaken its load loose on purpose. The little caravan started again, Andrew in the lead.

The road was built on the slope of the hills which closed in the plain of the Jordan. Stretching far to the west the men could see fields of ripe grain. The heat of early summer had come quickly this year and now threatened to destroy the crop. Farmers were hard at work cutting the wheat and threshing out the grain on platforms of earth pressed smooth as stone.

"Are you sure that John the Baptizer is still at Bethany?" called Andrew over his shoulder. John did not answer. After a moment, Andrew added, "Perhaps he has gone to some other place to preach." Still there was no reply. Irritated, Andrew turned. John had dropped behind and was walking with a stranger. Where had this traveler come from? He must have been moving fast to overtake them so swiftly. His robe was hitched high at the waist for easier walking. Andrew slowed and waited for the men.

"Could you tell us, friend, where John the Prophet is baptizing?" John was saying.

The traveler smiled. "I hear he is at Bethany on the Jordan, near Jericho. Do you want to hear him?"

"We are his disciples," responded John proudly; then he bit his lip. Andrew was frowning at him....