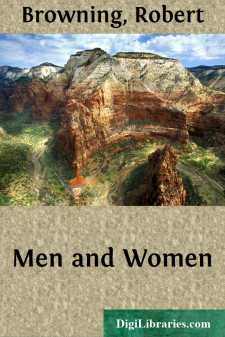 Thirteen years after the publication, in 1855, of the Poems, in two volumes, entitled "Men and Women," Browning reviewed his work and made an interesting reclassification of it. He separated the simpler pieces of a lyric or epic cast—such rhymed presentations of an emotional moment, for example, as "Mesmerism" and "A Woman's Last Word," or the picturesque rhymed verse telling a story of an experience, such as "Childe Roland" and "The Statue and the Bust"—from their more complex companions, which were almost altogether in blank verse, and, in general, markedly personified a typical man in his environment, a Cleon or Fra Lippo, a Rudel or a Blougram. These boldly sculptured figures he set apart from the others as the fit components of the more closely related group which ever since has constituted the division now known as "Men and Women."

Possibly the poet took some pleasure in thus bringing to confusion those critics who, beginning first to take any notice of his work after the issue of these volumes of 1855, discovered therein poems they praised chiefly by means of contrasting them with foregoing work they found unnoticeable and later work they declared inscrutable. Their bland discrimination, at any rate, in favor of "Men and Women" became henceforth inapplicable, since the poet not only cast out from the division they elected to honor the little lyrical pieces that caught their eye, but also brought to the front, from his earlier neglected work of the same kind as the monologues retained, his Johannes Agricola of 1836, Pictor Ignotus of 1845, and Rudel of 1842. Later criticism, moreover, that even yet assumes to ring the old changes of discrimination against everything but "Men and Women," is made not merely inapplicable by this re-arrangement, but uninformed, a meaningless echo of a borrowed opinion which has had the very ground from under it shifted.

The self-criticism of which this re-arrangement gives a hint is more valuable.

All the shorter poems accumulated up to this period, various as they are in theme and metrical form, are uniform in the fashioning of their contour and color. As soon as this underlying uniformity of make is recognized it may be seen to be the coloring and relief belonging to any sort of poetic material, whether ordinarily accounted dramatic material or not, which is imaginatively externalized and made concrete. This peculiarity of make Browning early acknowledged in his estimate of his shorter poems as characteristic of his touch, when he called his lyrics and romances dramatic. He became consciously sensitive later to slight variations effected by his manipulation in shape and shade which it yet takes a little thought to discern, even after his own redivision of his work has given the clew to his self-judgments.

Not only events, deeds, and characters—the usual subject-matter moulded and irradiated by dramatic power—but thoughts, impressions, experiences, impulses, no matter how spiritualized or complex or mobile, are transfused with the enlivening light of his creative energy in his shorter poems....