Memoirs of the Private Life, Return, and Reign of Napoleon in 1815, Vol. I 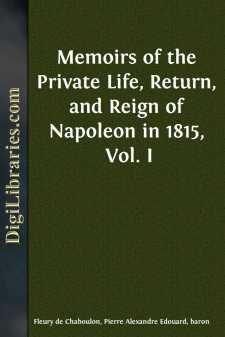 The revolution of the 20th of March will form unquestionably the most remarkable episode in the life of Napoleon, so fertile as it is in supernatural events. It has not been my intention, to write the history of it: this noble task is above my powers: I have only attempted, to place Napoleon on the stage of action, and oppose his words, his deeds, and the truth, to the erroneous assertions of certain historians, the falsehoods of the spirit of party, and the insults of those timeserving writers, who are accustomed to insult in misfortune those, to whom they have subsequently paid court.

Hitherto people have not been able to agree on the motives and circumstances, that determined the Emperor, to quit the island of Elba. Some supposed, that he had acted of his own accord: others, that he had conspired with his partisans the downfal of the Bourbons. Both these suppositions are equally false. The world will learn with surprise, perhaps with admiration, that this astonishing revolution was the work of two individuals and a few words.

The narrative of Colonel Z***, so valuable from the facts it reveals, appears to me to merit the reader's attention in other respects. On studying it carefully, we find in it the exhibition of those defects, those qualities, those passions, which, confounded together, form the character, so full of contrasts, of the incomprehensible Napoleon. We perceive him alternatively mistrustful and communicative, ardent and reserved, enterprising and irresolute, vindictive and generous, favourable to liberty and despotic. But we see predominant above all, that activity, that strength, that ardour of mind, those brilliant inspirations, and those sudden resolves, that belong only to extraordinary men, to men of genius.

The conferences I had at Bâle with the mysterious agent of Prince Metternich have remained to this day buried in profound secrecy. The historians, who have preceded me, relate, without any explanation, that the Duke of Otranto laid before the Emperor, at the moment of his abdication, a letter from M. de Metternich; and that this letter, artfully worded, had determined Napoleon to abdicate, in the hope that the crown would devolve to his son. The particulars given in these Memoirs will entirely change the ideas formed of this letter, and of its influence. They confirm the opinion too, pretty generally prevalent, that the allied sovereigns deemed the restoration of the Bourbons of little importance, and would willingly have consented, to place the young Prince Napoleon on the throne.

It had been supposed, that the famous decree, by which Prince de Talleyrand and his illustrious accomplices were sent before the courts of justice, was issued at Lyons in the first burst of a fit of vengeance. It will be seen, that it was the result of a plan simply political: and the noble resistance, which General Bertrand (now labouring under a sentence of death) thought it his duty to oppose to this measure, will add, if it be possible, to the high esteem, merited on so many accounts by this faithful friend to the unfortunate....