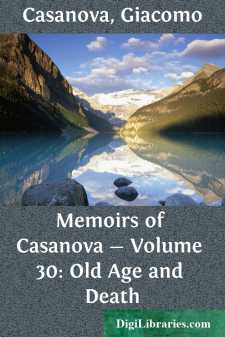 Whether the author died before the work was complete, whether the concluding volumes were destroyed by himself or his literary executors, or whether the MS. fell into bad hands, seems a matter of uncertainty, and the materials available towards a continuation of the Memoirs are extremely fragmentary. We know, however, that Casanova at last succeeded in obtaining his pardon from the authorities of the Republic, and he returned to Venice, where he exercised the honourable office of secret agent of the State Inquisitors—in plain language, he became a spy. It seems that the Knight of the Golden Spur made a rather indifferent "agent;" not surely, as a French writer suggests, because the dirty work was too dirty for his fingers, but probably because he was getting old and stupid and out-of-date, and failed to keep in touch with new forms of turpitude. He left Venice again and paid a visit to Vienna, saw beloved Paris once more, and there met Count Wallenstein, or Waldstein. The conversation turned on magic and the occult sciences, in, which Casanova was an adept, as the reader of the Memoirs will remember, and the count took a fancy to the charlatan. In short Casanova became librarian at the count's Castle of Dux, near Teplitz, and there he spent the fourteen remaining years of his life.

As the Prince de Ligne (from whose Memoirs we learn these particulars) remarks, Casanova's life had been a stormy and adventurous one, and it might have been expected that he would have found his patron's library a pleasant refuge after so many toils and travels. But the man carried rough weather and storm in his own heart, and found daily opportunities of mortification and resentment. The coffee was ill made, the maccaroni not cooked in the true Italian style, the dogs had bayed during the night, he had been made to dine at a small table, the parish priest had tried to convert him, the soup had been served too hot on purpose to annoy him, he had not been introduced to a distinguished guest, the count had lent a book without telling him, a groom had not taken off his hat; such were his complaints. The fact is Casanova felt his dependent position and his utter poverty, and was all the more determined to stand to his dignity as a man who had talked with all the crowned heads of Europe, and had fought a duel with the Polish general. And he had another reason for finding life bitter—he had lived beyond his time. Louis XV. was dead, and Louis XVI. had been guillotined; the Revolution had come; and Casanova, his dress, and his manners, appeared as odd and antique as some "blood of the Regency" would appear to us of these days. Sixty years before, Marcel, the famous dancing-master, had taught young Casanova how to enter a room with a lowly and ceremonious bow; and still, though the eighteenth century is drawing to a close, old Casanova enters the rooms of Dux with the same stately bow, but now everyone laughs. Old Casanova treads the grave measures of the minuet; they applauded his dancing once, but now everyone laughs....