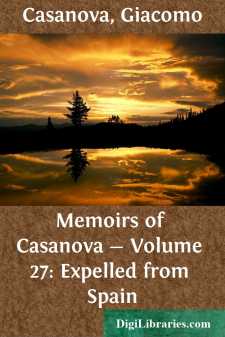 If these Memoirs, only written to console me in the dreadful weariness which is slowly killing me in Bohemia—and which, perhaps, would kill me anywhere, since, though my body is old, my spirit and my desires are as young as ever—if these Memoirs are ever read, I repeat, they will only be read when I am gone, and all censure will be lost on me.

Nevertheless, seeing that men are divided into two sections, the one and by far the greater composed of the ignorant and superficial, and the other of the learned and reflective, I beg to state that it is to the latter I would appeal. Their judgment, I believe, will be in favour of my veracity, and, indeed, why should I not be veracious? A man can have no object in deceiving himself, and it is for myself that I chiefly write.

Hitherto I have spoken nothing but the truth, without considering whether the truth is in my favour or no. My book is not a work of dogmatic theology, but I do not think it will do harm to anyone; while I fancy that those who know how to imitate the bee and to get honey from every flower will be able to extract some good from the catalogue of my vices and virtues.

After this digression (it may be too long, but that is my business and none other's), I must confess that never have I had so unpleasant a truth to set down as that which I am going to relate. I committed a fatal act of indiscretion—an act which after all these years still gives my heart a pang as I think of it.

The day after my conquest I dined with the Venetian ambassador, and I had the pleasure of hearing that all the ministers and grandees with whom I had associated had the highest possible opinion of me. In three or four days the king, the royal family, and the ministers would return to town, and I expected to have daily conferences with the latter respecting the colony in the Sierra Morena, where I should most probably be going. Manucci, who continued to treat me as a valued friend, proposed to accompany me on my journey, and would bring with him an adventuress, who called herself Porto-Carrero, pretending to be the daughter or niece of the late cardinal of that name, and thus obtained a good deal of consideration; though in reality she was only the mistress of the French consul at Madrid, the Abbe Bigliardi.

Such was the promising state of my prospects when my evil genius brought to Madrid a native of Liege, Baron de Fraiture, chief huntsman of the principality, and a profligate, a gamester, and a cheat, like all those who proclaim their belief in his honesty nowadays.

I had unfortunately met him at Spa, and told him I was was going to Portugal. He had come after me, hoping to use me as a means of getting into good society, and of filling his pocket with the money of the dupes he aspired to make.

Gamesters have never had any proof of my belonging to their infernal clique, but they have always persisted in believing that I too am a "Greek."

As soon as this baron heard that I was in Madrid he called on me, and by dint of politeness obliged me to receive him....