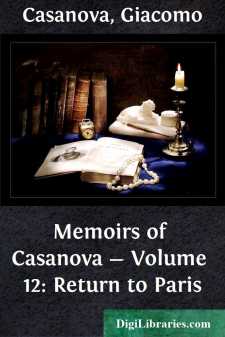 My Fortune in Holland—My Return to Paris with Young Pompeati

Amongst the letters which were waiting for me was one from the comptroller-general, which advised me that twenty millions in Government securities had been placed in the hands of M. d'Afri, who was not to go beyond a loss of eight per cent.; and another letter from my good patron, M. de Bernis, telling me to do the best I could, and to be assured that the ambassador would be instructed to consent to whatever bargain might be made, provided the rate was not more disadvantageous than that of the exchange at Paris. Boaz, who was astonished at the bargain I had made with my shares, wanted to discount the Government securities for me, and I should very likely have agreed to his terms if he had not required me to give him three months, and the promise that the agreement should hold even in the case of peace being concluded in the meanwhile. It was not long before I saw that I should do well to get back to Amsterdam, but I did not care to break my word to Therese, whom I had promised to meet at the Hague. I received a letter from her while I was at the play, and the servant who brought it told me he was waiting to conduct me to her. I sent my own servant home, and set out on my quest.

My guide made me climb to the fourth floor of a somewhat wretched house, and there I found this strange woman in a small room, attended by her son and daughter. The table stood in the midst of the room, and was covered with a black cloth, and the two candles standing upon it made it look like some sort of sepulchral altar. The Hague was a Court town. I was richly dressed; my elaborate attire made the saddest possible contrast with the gloom of my surroundings. Therese, dressed in black and seated between her children at that black table, reminded me of Medea. To see these two fair young creatures vowed to a lot of misery and disgrace was a sad and touching sight. I took the boy between my arms, and pressing him to my breast called him my son. His mother told him to look upon me as his father from henceforth. The lad recognized me; he remembered, much to my delight, seeing me in the May of 1753, in Venice, at Madame Manzoni's. He was slight but strong; his limbs were well proportioned, and his features intellectual. He was thirteen years old.

His sister sat perfectly still, apparently waiting for her turn to come. I took her on my knee, and as I embraced her, nature herself seemed to tell me that she was my daughter. She took my kisses in silence, but it was easy to see that she thought herself preferred to her brother, and was charmed with the idea. All her clothing was a slight frock, and I was able to feel every limb and to kiss her pretty little body all over, delighted that so sweet a being owed her existence to me.

"Mamma, dear," said she, "is not this fine gentleman the same we saw at Amsterdam, and who was taken for my papa because I am like him? But that cannot be, for my papa is dead."

"So he is, sweetheart; but I may be your dear friend, mayn't I? Would you like to have me for a friend?"

"Yes, yes!" she cried, and throwing her arms about my neck gave me a thousand kisses, which I returned with delight....