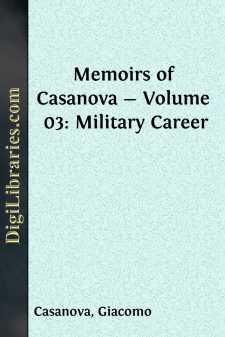 I Renounce the Clerical Profession, and Enter the MilitaryService—Therese Leaves for Naples, and I Go to Venice—I Am AppointedEnsign in the Army of My Native Country—I Embark for Corfu, and Land atOrsera to Take a Walk

I had been careful, on my arrival in Bologna, to take up my quarters at a small inn, so as not to attract any notice, and as soon as I had dispatched my letters to Therese and the French officer, I thought of purchasing some linen, as it was at least doubtful whether I should ever get my trunk. I deemed it expedient to order some clothes likewise. I was thus ruminating, when it suddenly struck me that I was not likely now to succeed in the Church, but feeling great uncertainty as to the profession I ought to adopt, I took a fancy to transform myself into an officer, as it was evident that I had not to account to anyone for my actions. It was a very natural fancy at my age, for I had just passed through two armies in which I had seen no respect paid to any garb but to the military uniform, and I did not see why I should not cause myself to be respected likewise. Besides, I was thinking of returning to Venice, and felt great delight at the idea of shewing myself there in the garb of honour, for I had been rather ill-treated in that of religion.

I enquired for a good tailor: death was brought to me, for the tailor sent to me was named Morte. I explained to him how I wanted my uniform made, I chose the cloth, he took my measure, and the next day I was transformed into a follower of Mars. I procured a long sword, and with my fine cane in hand, with a well-brushed hat ornamented with a black cockade, and wearing a long false pigtail, I sallied forth and walked all over the city.

I bethought myself that the importance of my new calling required a better and more showy lodging than the one I had secured on my arrival, and I moved to the best inn. I like even now to recollect the pleasing impression I felt when I was able to admire myself full length in a large mirror. I was highly pleased with my own person! I thought myself made by nature to wear and to honour the military costume, which I had adopted through the most fortunate impulse. Certain that nobody knew me, I enjoyed by anticipation all the conjectures which people would indulge in respecting me, when I made my first appearance in the most fashionable cafe of the town.

My uniform was white, the vest blue, a gold and silver shoulder-knot, and a sword-knot of the same material. Very well pleased with my grand appearance, I went to the coffee-room, and, taking some chocolate, began to read the newspapers, quite at my ease, and delighted to see that everybody was puzzled. A bold individual, in the hope of getting me into conversation, came to me and addressed me; I answered him with a monosyllable, and I observed that everyone was at a loss what to make of me. When I had sufficiently enjoyed public admiration in the coffee-room, I promenaded in the busiest thoroughfares of the city, and returned to the inn, where I had dinner by myself.

I had just concluded my repast when my landlord presented himself with the travellers' book, in which he wanted to register my name.

"Your profession, if you please, sir?"

"Where do you come from?"

"That is no business of yours."

This answer, which I thought was in keeping with my external appearance, had the desired effect: the landlord bowed himself out, and I felt highly pleased with myself, for I knew that I should enjoy perfect freedom in Bologna, and I was certain that mine host had visited me at the instance of some curious person eager to know who I was....