Memoirs of Casanova - Volume 02: a Cleric in Naples 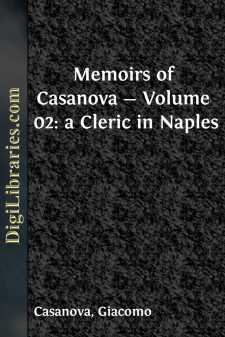 The retinue of the ambassador, which was styled "grand," appeared to me very small. It was composed of a Milanese steward, named Carcinelli, of a priest who fulfilled the duties of secretary because he could not write, of an old woman acting as housekeeper, of a man cook with his ugly wife, and eight or ten servants.

We reached Chiozza about noon. Immediately after landing, I politely asked the steward where I should put up, and his answer was:

"Wherever you please, provided you let this man know where it is, so that he can give you notice when the peotta is ready to sail. My duty," he added, "is to leave you at the lazzaretto of Ancona free of expense from the moment we leave this place. Until then enjoy yourself as well as you can."

The man to whom I was to give my address was the captain of the peotta. I asked him to recommend me a lodging.

"You can come to my house," he said, "if you have no objection to share a large bed with the cook, whose wife remains on board."

Unable to devise any better plan, I accepted the offer, and a sailor, carrying my trunk, accompanied me to the dwelling of the honest captain. My trunk had to be placed under the bed which filled up the room. I was amused at this, for I was not in a position to be over-fastidious, and, after partaking of some dinner at the inn, I went about the town. Chiozza is a peninsula, a sea-port belonging to Venice, with a population of ten thousand inhabitants, seamen, fishermen, merchants, lawyers, and government clerks.

I entered a coffee-room, and I had scarcely taken a seat when a young doctor-at-law, with whom I had studied in Padua, came up to me, and introduced me to a druggist whose shop was near by, saying that his house was the rendezvous of all the literary men of the place. A few minutes afterwards, a tall Jacobin friar, blind of one eye, called Corsini, whom I had known in Venice, came in and paid me many compliments. He told me that I had arrived just in time to go to a picnic got up by the Macaronic academicians for the next day, after a sitting of the academy in which every member was to recite something of his composition. He invited me to join them, and to gratify the meeting with the delivery of one of my productions. I accepted the invitation, and, after the reading of ten stanzas which I had written for the occasion, I was unanimously elected a member. My success at the picnic was still greater, for I disposed of such a quantity of macaroni that I was found worthy of the title of prince of the academy.

The young doctor, himself one of the academicians, introduced me to his family. His parents, who were in easy circumstances, received me very kindly. One of his sisters was very amiable, but the other, a professed nun, appeared to me a prodigy of beauty. I might have enjoyed myself in a very agreeable way in the midst of that charming family during my stay in Chiozza, but I suppose that it was my destiny to meet in that place with nothing but sorrows. The young doctor forewarned me that the monk Corsini was a very worthless fellow, despised by everybody, and advised me to avoid him....