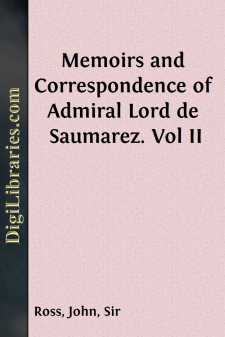 News of the Battles of the 6th and 12th of July reach England.—Rejoicings on the occasion, particularly described in a letter from Mrs. Saumarez.—Promotion of Lieutenant Dumaresq.—Letters from Earl St. Vincent, Mr. Tucker, and others.—Remarks on the conduct of the Governor and Garrison at Gibraltar.—State of the crew of the Cæsar.—Ship refitted.—Appointments of officers to the St. Antoine, and other vacancies.—Correspondence with the Spanish Governor at Cadiz on the subject of red-hot balls.—Accusation refuted.—Letters from Lord Keith, Sir John Warren, and Captain Dixon.—Squadron off Cadiz reinforced.—Sir James resumes the blockade of Cadiz.—His proceedings.—Remarks on the result of the two Actions.

The news of the splendid victory of the 12th of July was received in England with enthusiasm. After it became known that the squadron under Sir James Saumarez had been so materially damaged at Algeziras, it was thought impossible that the ships could have been prepared to meet the enemy in so short a time. The Admiral's despatches, subsequently to the first battle, stated that an overwhelming force had been sent to Algeziras from Cadiz; and, consequently, the news of his subsequent triumph over so great a superiority of force struck every person with astonishment.

Battle of the 12th July 1801, when two Spanish ships of the line were burnt, and one French 74 taken by Rear-admiral Sir James Saumarez in the Straits of Gibraltar.

The Louisa brig, Lieutenant Truscott, having on board Lieutenant Dumaresq, arrived off Mount's Bay on the 30th July. This officer landed with Sir James's despatches, and immediately proceeded to London. He was received at the Admiralty by Earl St. Vincent in the most gratifying manner. Mr. Addington, then prime minister, sent an express to Sir James's youngest brother at Brighton, requesting his presence in London; and, on his arrival, he in the handsomest manner presented him with a situation of trust and importance in the island of Ceylon, with a salary of two thousand pounds per annum. Lieutenants Dumaresq of the Cæsar, Jackson of the Superb, and Lillicrap of the Venerable, were promoted to the rank of commanders.

The extraordinary public sensation which this important and unexpected victory created, is described in the following letter from Mrs. Saumarez of Newington, (Sir James's sister-in-law,) to whom Lieutenant Dumaresq paid a visit on leaving the Admiralty.

It is impossible to express the admiration and enthusiasm which your late despatches have excited in the breasts of all ranks of people. You are now the theme of every conversation, the toast of every table, the hero of every woman, and the boast of every Englishman. When Dumaresq waited on Lord St. Vincent, his lordship squeezed his hand in the greatest rapture, exclaiming, "I knew it,—I knew it,—I knew the man,—I knew what he could do! It is the most daring thing that has been done this war. It is the first thing.—I knew it would be so!" He then gave Dumaresq his commission, and wrote a letter of congratulation to Lady Saumarez, which he charged Phil. Dumaresq to deliver with his own hand. I trust they are now both together; and, after staying there one day, Phil. is to return to town.

Lord St. Vincent also sent Dumaresq to Mr. Addington, who received him in the most gracious manner. He told Phil. everything that man could say in terms of approbation; and justly added, that, however the multitude might estimate and admire the last action, yet the first, in his own mind, and in the minds of men who understood the matter, was equally deserving of praise, and would have fixed their approbation of Sir James's conduct, even though he had failed in his second attempt. At the same time he owned, that the exertions made by the men after the first action, in order to meet the second, were beyond conception or example. Indeed, they must surpass Mr. Addington's conception, since even Lord St....