Memoirs and Correspondence of Admiral Lord de Saumarez, Vol. I 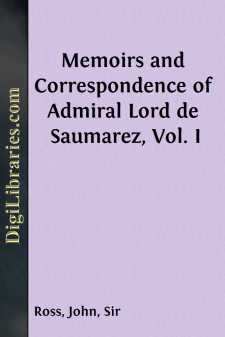 Genealogy of the family of Saumarez.—Curious Record.—Branches of the late family.—Marriage of the late Lord de Saumarez.

Admiral the Right Honourable James Lord de Saumarez, of Guernsey, was born, on the 11th March 1757, in the parish of St. Peter-Port, the principal town of that romantic island. The family, whose original name was De Sausmarez, is of Norman extraction, and of great antiquity in the island of Guernsey, where their lineage can be traced almost to the Norman conquest.

Their remote ancestor received from the Dukes of Normandy a fief of the district of Jerbourg, and was appointed hereditary captain (or chatelain) of the castle of that name, which lies within the limits of the fief, and is situated in the parish of St. Martin.

Among the records of the island, we find the following interesting particulars:—In the twenty-seventh year of the reign of Edward the First, at a court of chief pleas held at Guernsey, in the presence of the judges of assize, Matthew de Sausmarez made homage for his fief; which appears to have been acknowledged by an act of Edward the Second in the year 1313: and in the reign of Edward the Third, in the year 1331, an application was made by Matthew de Sausmarez for a confirmation of his rights and prerogatives, as formerly enjoyed by his ancestors.

On receipt of this petition, his Majesty sent an order to John de Roches, guardian of the Channel islands, to make a perquisition thereon; authorising him to give to it his royal assent if not found to be prejudicial to the rights of the Crown or the privileges of the inhabitants, who had, by consent of his Majesty's father, fortified the castle of Jerbourg as a place of retreat and protection, as also for the security of their effects in case of invasion by the enemy.

In pursuance of his Majesty's order, the guardian appointed twelve of the most respectable inhabitants of the island to be examined before the bailiff or chief magistrate, who declared upon oath that the predecessors of Matthew de Sausmarez held that appointment from the Crown, with sundry appurtenances and privileges, which, in consideration of their services as hereditary keepers of the castle, had always been, and ought to be, inseparable from the fief of Jerbourg; and they further deposed, that these were not in any respect detrimental to the prerogative of the Crown, or injurious to the rights of the inhabitants, who still retained the advantage and privilege of retreating into the castle, with their effects, in every emergency.

The following curious and interesting fact, as attached to this ancient fief, has been also recorded in a Guernsey periodical: "Whenever the lord had occasion to go to Jersey, his tenants were obliged to convey him thither, for which they received a gratuity of three sous, or a dinner; but they were not obliged to bring him back." And this exemption may be thus explained:—The lord, or captain of Jerbourg, in those days held a fief in Jersey, called by the same name, which no longer belongs to the De Saumarez family; but formerly, when it was possessed by the same individual, the same rights and privileges were attached, so that when the affairs of the lord called him to Jersey, he was conducted to that island by his Guernsey tenants, and brought back by those of Jersey.

It is indeed certain, that, during many years after the Norman conquest, several gentlemen possessed estates in both islands, more or less considerable in one than in the other. The fief of Jerbourg remained in the family of De Sausmarez till about the year 1555, when it became the property of Mr. John Andros, in right of Judith de Sausmarez: but it has since reverted to the descendants of the old family, and belonged to Thomas de Sausmarez, his Majesty's late attorney-general in the island of Guernsey, who died lately at a very advanced age,—the father of twenty-eight children!

The genealogy of the family between the year 1481, and the birth of the grandfather of the late Lord de Saumarez on the 4th June 1635, will be found in the Addenda, as also that of the subsequent members of the family who are not mentioned here; but, in proceeding, we cannot pass over the names of Captains Philip and Thomas Saumarez, uncles of the late lord, who were two of the bravest and most meritorious officers of their time....