Memoir, Correspondence, And Miscellanies, From The Papers Of Thomas Jefferson, Volume 4 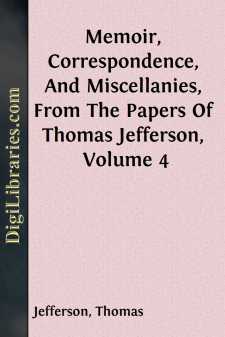 The enclosed letter came to hand by yesterday's post. You will be sensible of the circumstances which make it improper that I should hazard a formal answer, as well as of the desire its friendly aspect naturally excites, that those concerned in it should understand that the spirit they express is friendly viewed. You can judge also from your knowledge of the ground, whether it may be usefully encouraged. I take the liberty, therefore, of availing myself of your neighborhood to Boston, and of your friendship to me, to request you to say to the Captain and others verbally whatever you think would be proper, as expressive of my sentiments on the subject. With respect to the day on which they wish to fix their anniversary, they may be told, that disapproving myself of transferring the honors and veneration for the great birthday of our republic to any individual, or of dividing them with individuals, I have declined letting my own birthday be known, and have engaged my family not to communicate it. This has been the uniform answer to every application of the kind.

On further consideration as to the amendment to our constitution respecting Louisiana, I have thought it better, instead of enumerating the powers which Congress may exercise, to give them the same powers they have as to other portions of the Union generally, and to enumerate the special exceptions, in some such form as the following.

'Louisiana, as ceded by France to the United States, is made a part of the United States, its white inhabitants shall be citizens, and stand, as to their rights and obligations, on the same footing with other citizens of the United States, in analogous situations. Save only that as to the portion thereof lying north of an east and west line drawn through the mouth of Arkansas river, no new State shall be established, nor any grants of land made, other than to Indians, in exchange for equivalent portions of land occupied by them, until an amendment of the constitution shall be made for these purposes.

I quote this for your consideration, observing that the less that is said about any constitutional difficulty, the better: and that it will be desirable for Congress to do what is necessary, in silence. I find but one opinion as to the necessity of shutting up the country for some time. We meet in Washington the 25th of September to prepare for Congress. Accept my affectionate salutations, and great esteem and respect.

Your favor of the 3rd was delivered me at court; but we were much disappointed at not seeing you here, Mr....