Memoir, Correspondence, And Miscellanies, From The Papers Of Thomas Jefferson, Volume 3 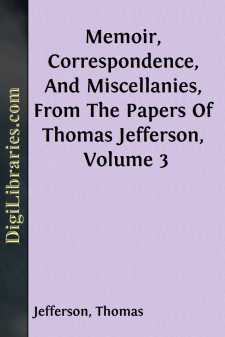 I am become very uneasy, lest you should have adopted some channel for the conveyance of your letters to me, which is unfaithful. I have none from you of later date than November the 25th, 1788, and of consequence, no acknowledgment of the receipt of any of mine, since that of August the 11th, 1788. Since that period, I have written to you of the following dates. 1788. August the 20th, September the 3rd, 5th, 24th, November the 14th, 19th, 29th. 1789. January the 11th, 14th, 21st, February the 4th, March the 1st, 12th, 14th, 15th, May the 9th, 11th, 12th, June the 17th, 24th, 29th. I know, through another person, that you have received mine of November the 29th, and that you have written an answer; but I have never received the answer, and it is this which suggests to me the fear of some general source of miscarriage.

The capture of three French merchant ships by the Algerines, under different pretexts, has produced great sensation in the seaports of this country, and some in its government. They have ordered some frigates to be armed at Toulon to punish them. There is a possibility that this circumstance, if not too soon set to rights by the Algerines, may furnish occasion to the States General, when they shall have leisure to attend to matters of this kind, to disavow any future tributary treaty with them. These pirates respect still less their treaty with Spain, and treat the Spaniards with an insolence greater than was usual before the treaty.

The scarcity of bread begins to lessen in the southern parts of France, where the harvest has commenced. Here it is still threatening, because we have yet three weeks to the beginning of harvest, and I think there has not been three days' provision beforehand in Paris, for two or three weeks past. Monsieur de Mirabeau, who is very hostile to Mr. Necker, wished to find a ground for censuring him, in a proposition to have a great quantity of flour furnished from the United States, which he supposed me to have made to Mr. Necker, and to have been refused by him; and he asked time of the States General to furnish proofs. The Marquis de la Fayette immediately gave me notice of this matter, and I wrote him a letter to disavow having ever made any such proposition to Mr. Necker, which I desired him to communicate to the States. I waited immediately on Mr. Necker and Monsieur de Montmorin, satisfied them that what had been suggested was absolutely without foundation from me; and indeed they had not needed this testimony. I gave them copies of my letter to the Marquis de la Fayette, which was afterwards printed. The Marquis, on the receipt of my letter, showed it to Mirabeau. who turned then to a paper from which he had drawn his information, and found he had totally mistaken it. He promised immediately that he would himself declare his error to the States General, and read to them my letter, which he did. I state this matter to you, though of little consequence in itself, because it might go to you misstated in the English papers....