Memoir, Correspondence, And Miscellanies, From The Papers Of Thomas Jefferson, Volume 2 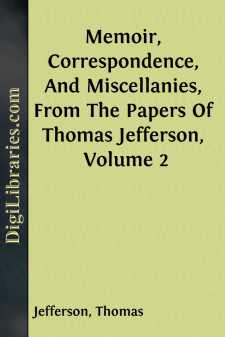 In your letter of October the 29th, you desired me to send you one of the new lamps. I tried at every probable place in Paris, and could not get a tolerable one. I have been glad of it since I came here, as I find them much better made here. I now deliver one, with this letter, into the hands of Mr. Fulwar Skipwith, a merchant from Virginia, settled here, who promises to send it to you, with one for Mr. C. Thomson. Of this be pleased to accept, from me. It is now found, that they may be used with almost any oil.

I expect to leave this place in about three days. Our public letters, joint and separate, will inform you what has been done, and what could not be done here. With respect to a commercial treaty with this country, be assured, that this government not only has it not in contemplation at present to make any, but that they do not conceive that any circumstances will arise, which shall render it expedient for them to have any political connection with us. They think we shall be glad of their commerce on their own terms. There is no party in our favor here, either in power or out of power. Even the opposition concur with the ministry and the nation in this. I can scarcely consider as a party, the Marquis of Lansdowne, and a half dozen characters about him, such as Dr. Price, &c. who are impressed with the utility of a friendly connection with us. The former does not venture this sentiment in parliament, and the latter are not in situations to be heard. The Marquis of Lansdowne spoke to me affectionately of your brother, Doctor Lee, and desired his respects to him, which I beg leave to communicate through you. Were he to come into the ministry (of which there is not the most distant prospect), he must adopt the King's system, or go out again, as he did before, for daring to depart from it. When we see, that through all the changes of ministry, which have taken place during the present reign, there has never been a change of system with respect to America, we cannot reasonably doubt, that this is the system of the King himself. His obstinacy of character we know; his hostility we have known, and it is embittered by ill success. If ever this nation, during his life, enter into arrangements with us, it must be in consequence of events, of which they do not at present see a possibility. The object of the present ministry is to buoy up the nation with flattering calculations of their present prosperity, and to make them believe they are better without us than with us. This they seriously believe; for what is it men cannot be made to believe? I dined the other day in a company of the ministerial party. A General Clark, a Scotchman and ministerialist, sat next to me. He introduced the subject of American affairs, and in the course of the conversation told me, that were America to petition parliament to be again received on their former footing, the petition would be very generally rejected. He was serious in this, and I think it was the sentiment of the company, and is the sentiment perhaps of the nation....