Memoir, Correspondence, And Miscellanies, From The Papers Of Thomas Jefferson, Volume 1 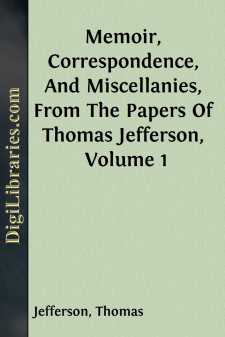 January 6, 1821. At the age of 77, I begin to make some memoranda, and state some recollections of dates and facts concerning myself, for my own more ready reference, and for the information of my family.

The tradition in my father's family was, that their ancestor came to this country from Wales, and from near the mountain of Snowden, the highest in Great Britain. I noted once a case from Wales, in the law reports, where a person of our name was either plaintiff or defendant; and one of the same name was secretary to the Virginia Company. These are the only instances in which I have met with the name in that country. I have found it in our early records; but the first particular information I have of any ancestor was of my grandfather, who lived at the place in Chesterfield called Ozborne's, and owned the lands afterwards the glebe of the parish. He had three sons; Thomas who died young, Field who settled on the waters of Roanoke and left numerous descendants, and Peter, my father, who settled on the lands I still own, called Shadwell, adjoining my present residence. He was born February 29, 1707-8, and intermarried 1739, with Jane Randolph, of the age of 19, daughter of Isham Randolph, one of the seven sons of that name and family settled at Dungeoness in Goochland. They trace their pedigree far back in England and Scotland, to which let every one ascribe the faith and merit he chooses.

My father's education had been quite neglected; but being of a strong mind, sound judgment, and eager after information, he read much and improved himself, insomuch that he was chosen, with Joshua Fry, professor of Mathematics in William and Mary college, to continue the boundary line between Virginia and North Carolina, which had been begun by Colonel Byrd; and was afterwards employed with the same Mr. Fry, to make the first map of Virginia which had ever been made, that of Captain Smith being merely a conjectural sketch. They possessed excellent materials for so much of the country as is below the Blue Ridge; little being then known beyond that Ridge. He was the third or fourth settler, about the year 1737, of the part of the country in which I live. He died August 17th, 1757, leaving my mother a widow, who lived till 1776, with six daughters and two sons, myself the elder. To my younger brother he left his estate on James river, called Snowden, after the supposed birth-place of the family: to myself, the lands on which I was born and live. He placed me at the English school at five years of age; and at the Latin at nine, where I continued until his death. My teacher, Mr. Douglas, a clergyman from Scotland, with the rudiments of the Latin and Greek languages, taught me the French; and on the death of my father, I went to the Reverend Mr. Maury, a correct classical scholar, with whom I continued two years; and then, to wit, in the spring of 1760, went to William and Mary college, where I continued two years. It was my great good fortune, and what probably fixed the destinies of my life, that Dr....